A Wasp Finds the Seat of the Cockroach Soul 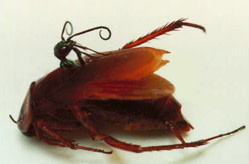 If blogs could have mascots, the Loom's would be the Emerald Cockroach Wasp (Ampulex compressa). Back in 2006, I first wrote about the grisly sophistication of this insect, which turns cockroaches into zombie hosts to be devoured by their offspring. Since then I've blogged from time to time about new research on this parasite's parasite. Last year I sang the praises of the Emerald Cockroach Wasp on the NPR show Radiolab, and, to my surprise, brought some peace of mind to a very scared kid. Scientists still don't understand the wasp very well, though, and so I decided last night to see if anyone had discovered something new about it recently. It turns out Ram Gal and Frederic Libersat, two scientists at Ben Gurion University in Israel, just published a paper in which they reveal one of the secrets to zombification. In effect, they identified the seat of the cockroach soul. Before I describe the new results, let me just refresh your memory about what the Emerald Cockroach Wasp actually does. Like many parasites, the Emerald Cockroach Wasp manipulates its host's behavior for its own benefit. As I explain in Parasite Rex, parasites make their hosts do lots of different things (get them into the body of their next host, act as a bodyguard, or build them a shelter to name a few examples). The Emerald Cockroach Wasp needs a live, tame cockroach to feed its babies. When the female wasp is ready to lay her eggs, she seeks out a cockroach. Landing on the prospective host, she delivers two precise stings. 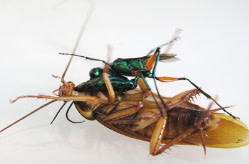 The first she delivers to the roach’s mid-section, causing its front legs buckle. The brief paralysis caused by the first sting gives the wasp the luxury of time to deliver a more precise sting to the head. The wasp slips her stinger through the roach’s exoskeleton and directly into its brain. She injects another venom that robs the cockroach of the ability to start walking on its own. The wasp takes hold of one of the roach’s antennae and leads it, like a dog on a leash, to its doom: the wasp’s burrow. The roach creeps obediently inside and sits there quietly as the wasp lays her egg on its underside. The wasp leaves the burrow, sealing the opening behind her. The egg hatches, and the larva chews a hole in the side of the roach. In it goes. The larva grows inside the roach, devouring the organs of its host, for about eight days. It is then ready to form a pupa inside the roach. After four more weeks, the wasp grows to an adult. It breaks out of its pupa, and out of the roach as well. Only then does the zombie cockroach die. The zombifying sting has long fascinated scientists. It does not paralyze the roach. It does not put it to sleep. If the zombie roach is frightened, it jumps in the air like a normal roach, but then it fails to run away. What does the wasp understand about the nervous system that we do not? 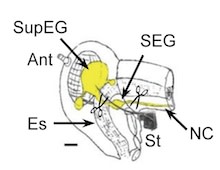 The cockroach brain is not a brain like ours--a single solid lump of neurons like the one in our head. It's actually a group of linked clusters of neurons, called the cerebral ganglia. Some studies have suggested that one of those clusters, called the sub-esophageal ganglia (SEG), boosts the signals required for an insect to start walking. So Gal and Libersat decided to see how wasps would behave if the roaches they stung were missing the SEG. Normally, the wasps only spends about 15 seconds inserting its stinger into the cockroach's head. But when Gal and Liberset destroyed the SEG in roaches, the wasps were flummoxed. They spent over three minutes poking and prodding inside the cockroach's head. By contrast, when the scientists cut the nerve running from the SEG to the roach's body (marked here as NC), the wasps didn't spend any extra time delivering the sting. It thus appears that the wasps zero in on the SEG to zombify their host. Gal and Libersat took a closer look at the SEG of zombified cockroaches. Using an electrode, they measured the activity of the SEG. They discovered that the neurons in the SEG became quiet. They spontaneoulsy fired half as often as the neurons in the SEG of normal cockroaches. And a puff of air on the antennae of the zombified roaches--which usually triggers a roar of activity in the SEG so that the insect can escape--produced only half the normal activity in the neurons. To cap off the experiment, Gal and Libersat then pretended to be wasps. They injected wasp venom directly into the SEG of healthy cockroaches. The injection zombified the roaches. The insects barely moved on their own, and they hardly budged in response to a terrifying puff of air. Gal and Libersat could only zombify the cockroaches with a shot to the SEG, however. If they injected the venom into a neighboring cluster of neurons (marked here as SupEG), the roaches flitted about as if nothing had happened. While this study does a good job of pinpointing the place where the wasps perform their neurosurgery, it does not close the book. The SEG is actually a complicated maze of neurons. Gal and Libersat are now investigated exactly where in the SEG the wasp sends its stinger, and what precisely its venom does to those particular neurons. The Emerald Cockroach Wasp will no doubt make yet another visit to the Loom in years to come, because it has more to teach us.