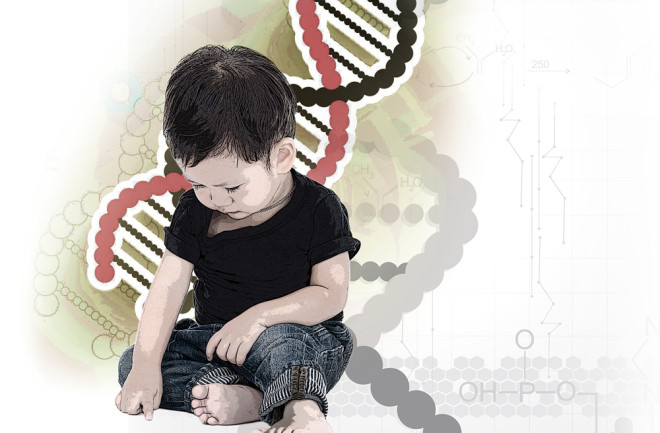 The 2½-year-old boy with curly dark-brown hair was sitting in my exam room, holding a Spider-Man figure in his small hands. He looked up at me with a shy smile, but didn’t say anything.

“He doesn’t talk much,” said his mother. “And when he does, it’s really hard to understand him.”

“Yes, Dr. Connolly mentioned that when he referred Carlos to me,” I replied. “Is there anything else you’re worried about?”

“Well, he just seems slow. He didn’t start walking until he was almost a year and a half, and he still doesn’t say many words — probably less than 30 altogether. And he only says one word at a time.”

“I see. Does he point to any body parts? You know, eyes, nose, mouth?”

“Just his nose. Mostly he just looks at us and smiles. He’s really friendly.”

“Yes, I can see that,” I said. Clearly something was off. At 30 months, Carlos should have been saying more than 100 words, and ought to be putting them together in three- or four-word sentences. And he had not started walking until 18 months, while most children are walking by a year. I asked about things he was and was not able to do, and then I watched him play with blocks, do puzzles, draw with crayons — all part of the developmental assessment. Carlos was functioning at about the 21-month level in his motor, cognitive, language and social development. This gave him a “developmental quotient” of about 70, which is in the mildly delayed range.

There are many reasons for a child to have a developmental delay, and in many cases we never come up with a specific reason. I started going through the list in my mind, and then noticed something: When Carlos did talk, his speech was even less clear than an 18-month-old’s, let alone a 2½-year-old’s. Many of his words were very distorted, which suggested that he might not be able to move his tongue, pharynx and palate properly when he tried to speak.

Also, when he made certain sounds, air seemed to come out of his nose. That meant he could have velopharyngeal insufficiency — the soft palate wasn’t closing off the nasal cavity during speech.

Then I remembered something I’d noted when reviewing Carlos’ medical history. He was born with a large ventricular septal defect (VSD), a “hole in the heart” that required surgery when he was 3 months old.

While a VSD would not have caused his developmental problems, that bit of medical history, combined with the way his mouth and palate worked, led me to what might be causing Carlos’ developmental delay. I just needed to do one blood test to be sure.

Carlos had three red flags in his medical history: congenital heart disease, developmental delay and a likely problem with his soft palate. When I put these together, I suspected that he might have a genetic disorder called velocardiofacial syndrome (VCF).

VCF is also known as 22q11.2 deletion syndrome because it occurs when a small piece is missing from a specific location on chromosome 22. Interestingly, there is another condition, DiGeorge syndrome, that is caused by a deletion in the same location on the same chromosome. I once cared for a 7-year-old boy with DiGeorge syndrome. David had persistent hypocalcemia (low blood calcium levels) and frequent infections because of inadequate levels of T cells in his immune system. He also had a small head, moderately severe mental retardation and a large ventricular septal defect.

If I had seen David and Carlos in my office on the same day, I would never have thought they had the same genetic disorder. But the field of genetics has undergone a revolutionary change during my clinical career. When I was in training, we made genetic diagnoses largely by recognizing patterns of abnormalities. Now we can detect very small changes in the chromosomes that are the root causes of those patterns. Except for the heart defect, David and Carlos had no abnormalities in common. Yet if Carlos had the chromosomal deletion I suspected, it would mean that he and David had the same genetic condition.

An Error of Division

How can this be? To understand the solution to this puzzle, a brief review of basic genetics may be helpful. Most of us remember from high school biology that the genetic material in each of our cells is composed of long strands of DNA, which are arranged in thousands of segments called genes. During most of the cell’s life, the strands are in relative disarray. But at the time of cell division, they are packaged into elongated bundles called chromosomes.

Human cells have 46 chromosomes arranged in pairs — except for the germ cells, sperm and egg, which each have 23 unpaired chromosomes. The process of meiosis, the delicate dance of DNA twisting and untwisting with its supporting cast of proteins and other molecules, neatly separates each pair of chromosomes and allocates them efficiently to the nuclei of the primordial germ cells.

But the process is seldom that neat. Errors can occur, and even a small one can result in big problems for a child like Carlos. Sometimes an entire chromosome is misdirected during the formation of a germ cell. Then all the cells of the resultant embryo have a missing or added chromosome, as in trisomy 21 (Down syndrome), where chromosome 21 has three chromosomes instead of a pair.

I didn’t think that Carlos had Down syndrome. Instead, I suspected that when his genetic code was forming, a much more common type of error occurred. A tiny piece of a chromosome can get lost, or duplicated, or moved onto another chromosome where it doesn’t belong. This happens more frequently than you might think. Most of the time, the misplaced genetic material is not critical, and this natural error does no harm. But if enough critical genes are lost or gained, a pattern of significant medical or developmental problems can result.

The 22q11.2 deletion is an example of a contiguous gene syndrome: The deleted genetic material includes a number of genes that are next to one another on the chromosome. This particular syndrome, which occurs in about 1 in 4,000 births, has been associated with more than 200 abnormalities. The most common problems include heart defects, unusual facial features, problems with the palate (sometimes affecting speech), feeding problems, gastrointestinal difficulties, frequent infections and other manifestations of immune system problems, growth delay, kidney problems, hearing loss, low calcium in the newborn period, cognitive difficulties including developmental delay and learning disorders, behavior problems, and other developmental disorders, including autism.

Whether a particular person with 22q11.2 deletion has any or all of these conditions depends on how large the deletion is — in other words, which genes are lost and which are retained. David, the boy with DiGeorge syndrome, presumably lost a larger piece of the chromosome than Carlos, who had heart disease but did not have many of the other complications.

Teasing Out the Anomaly

The blood test I ordered for Carlos is a way of looking at an individual’s chromosomes in very fine detail. When I was a medical student, if we wanted to look at a person’s chromosomes, a technologist would literally take a photograph of a dividing cell, print the photo, cut out the images of each chromosome and line them up in order on a sheet of paper. We now use what’s called an aCGH study (array comparative genomic hybridization), in which the patient’s DNA, broken into small pieces, is placed on a plastic chip that has been impregnated with hundreds of snippets of DNA. If the patient’s chromosomes have extra or missing genetic material at one location on a particular chromosome, then too much or too little DNA will bind to the corresponding area of the chip, and the anomaly can be detected.

A few days later, Carlos’ aCGH test came back positive for a deletion in the long arm of chromosome 22, at location 22q11.2. I called his mother and told her the results.

“But what does it mean?” she asked.

“It means we now know why Carlos is developing and learning more slowly than other children. And we also know that it isn’t your fault.” I have rarely known a patient with a developmental disability whose parent did not wonder if they might have “caused” the problem in some way, though that is almost never the case.

But there is no treatment for contiguous gene syndromes like 22q11.2 deletion; too many genes and complex biological systems are affected. However, Carlos’ delays appeared to be mild. With early intervention and special education programs, and with kind and loving care at home, there was a good chance that Carlos would eventually be able to live on his own and have a happy and productive life.

And that’s just what every parent hopes for.

[This article originally appeared in print as "Unexpected Delay."]