A persistent fever after returning from Egypt usually means a tropical disease infection. For this toddler, it was just one of many red herrings. 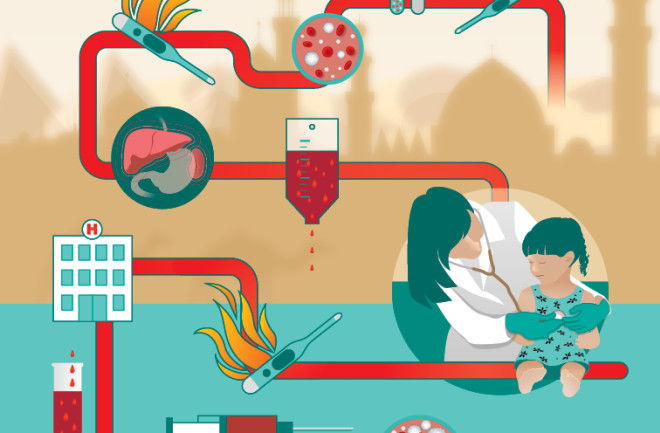 This story appeared in the September/October 2020 of Discover magazine as "One in a Million." We hope you’ll subscribe to Discover and help support science journalism at a time when it’s needed the most.

For 2-year-old Farida and her family, the trip to Egypt was a pleasant prelude to what would turn into a hard few months. She spent time with relatives in Cairo, visiting her grandparents for the first time. She enjoyed lots of traditional food. She even went to visit her father’s hometown, a rural area several hours south of Cairo.

But the long getaway, which lasted from after Christmas until early spring, would be the last time her family was able to relax for months. As April rolled around, Farida began running fevers. They began, on and off, without any other symptoms. After two weeks, her mother took her to the family doctor, who prescribed antibiotics for a presumed ear infection. But the fevers didn’t subside.

When the family returned a week later for more tests, the doctor found that Farida’s hemoglobin, a protein in red blood cells that carries oxygen from the lungs to vital organs, was low, at 50 grams per liter of blood. For children, the normal hemoglobin range is between 115 g/L and 135 g/L. Farida was diagnosed with anemia, a common blood disorder in which a person doesn’t produce enough red blood cells to carry oxygen throughout their body. This could signal a lot of things, the most worrisome being an active bleed or cancer.

“You need to go to the emergency room,” the doctor advised Farida’s parents. In the ER, repeat testing found that her hemoglobin was now closer to normal. All other signs pointed to a viral infection. Her physical exam was otherwise normal, so Farida was advised to return home. But her fevers persisted. She began refusing meals and was no longer lively and happy.

Her mother took her back to the ER three days later. Her physical exam showed her abdomen was distended, and her liver and spleen were enlarged to twice their normal size. Plus, her hemoglobin was back down again, to 46 g/L. That’s when Farida was admitted to my pediatrics unit.

Hunting for an Answer

Farida was a quiet girl, and her big brown eyes winced when I examined her abdomen — it seemed to be tender. Her olive skin had a slightly pale-green tinge to it. Her fevers hadn’t stopped, and her heart rate was elevated. Immediately, a slew of tropical diseases came to mind: malaria, yersiniosis, schistosomiasis. Our infectious diseases team searched for all the weird possibilities returning travelers from Egypt might carry.

I asked her mother more questions about their trip, but the answers didn’t raise any red flags. No, no one was sick in Egypt, she said. Farida had drunk clean drinking water, did not wade in local rivers, had no insect bites, and didn’t spend time with animals.

My team ordered more lab tests and found that many of the blood markers suggested an inflammatory disease. To determine whether she had a specific infection, we tested for rhinovirus, which causes the common cold, and Epstein-Barr, the virus behind infectious mononucleosis, or “mono.” Both came back positive.

But an abdominal ultrasound found Farida’s liver measured twice as large as normal. Lymph nodes around both the spleen and liver were also enlarged. The rest of the infectious disease workup, including testing for malaria, was negative. Scans of her heart and lungs were also normal.

By now, we had a few positive tests, but nothing really fit together to explain her fevers. “Can this all be explained by the virus?” her mother asked. It wasn’t clear, but we weren’t convinced — at this point, we were looking at five straight weeks of fevers. Epstein-Barr alone doesn’t cause that, and wouldn’t explain her symptoms and test results.

We treated Farida for Epstein-Barr with an anti-viral medication called valganciclovir. She also received several blood transfusions to treat her anemia. Yet her fevers held fast. Specialists conducted two bone marrow biopsies for potential blood cancer and aplastic anemia, in which the bone marrow fails to produce red blood cells, white blood cells and platelets. The biopsies came back negative.

Her immune cells were tested and were normal. The rheumatology team, which specializes in autoimmune disorders and diseases of the joints, suggested that Farida’s immune system might be the culprit. It appeared her immune system was effectively attacking itself.

That’s when the metabolic disease team got involved — they suspected a rare condition called Gaucher disease and suggested a third bone marrow biopsy. The findings showed that Farida’s bone marrow, which would typically be filled with still-forming red blood cells, was almost completely replaced by a type of white blood cell called mononuclear cells. The pathologist added a special stain to the cells and found they were positive with a marker called CD1a, which led to a diagnosis: Langerhans cell histiocytosis (LCH).

LCH is a rare cancer that primarily affects children, with the disease occurring in about 1 to 5 children out of a million. It involves the abnormal migration and growth of Langerhans cells, a type of dendritic cell, which are involved in the body’s immune response. This can cause lesions to form, driven by inflammation in tissues and organs.

While there are many disorders involving abnormal bone marrow function, LCH is unique in its wide-ranging presentation of symptoms. It’s sometimes called the “disease of many faces” because these symptoms can range from solitary skin lesions to life-threatening, multi-organ involvement.

The cause of LCH has not yet been identified, but it may have an autoimmune root. While 50 percent of patients with the disease have skin lesions and 80 percent have lesions on their bones, in around a third of cases it will involve several body systems at once, such as the heart, kidneys, liver and spleen.

In recent years, researchers have suggested that viruses such as herpes virus-6, Merkel cell polyomavirus and Epstein-Barr could trigger LCH. Other researchers have found genetic links, where the disease clusters in families who have underlying immune system issues.

LCH is diagnosed through skin or bone biopsies. Treatment varies from removing a small skin lesion to steroids and chemotherapy for multisystem LCH.

Our diagnosis of Farida ultimately involved a lot of patience and luck. She was transferred to the hematology and oncology department, where she received intravenous steroids before beginning a round of chemotherapy. Her fevers subsided after just three days of treatment.

Farida was later transferred to a more specialized hospital that offered access to LCH experts. Now 5 years old, she is still monitored on a biweekly basis. And while she hasn’t been back to Egypt since, Farida and her family enjoy regular video chats with her grandparents and family there. They’re all glad that this difficult time is behind them.

Amitha Kalaichandran is a pediatrics resident doctor based in Canada. The cases described in Vital Signs are real, but names and certain details have been changed.