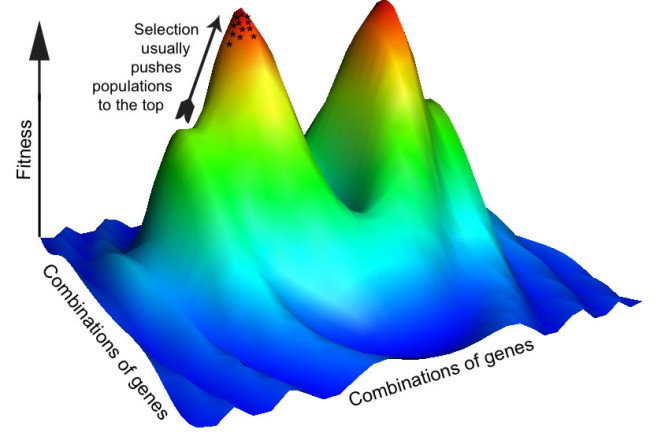 Last week I took an intellectual road trip back nearly a century and explored the historical context and scientific logic by which R. A. Fisher definitively fused Mendelian genetics with quantitative evolutionary biology. In the process he helped birth the field of population genetics. While the genetics which we today are more familiar with begins at the biophysical substrate, the DNA molecule, and the phenomena which emerge from its concrete structure, population genetics starts with the abstract concept of the gene. This abstraction and its variants are construed as algebraic quantities from which one can infer a host of dynamics. These are the processes which are the foundations of evolutionary change, as population genetics flows into evolutionary genetics, and ultimately the raw material of natural history.

Fisher's accomplishments were a function of both his abilities and his passions. He was a mathematical prodigy, with the ability to distill natural processes down to highly general abstractions. And like many English gentlemen of his age he had a passion for evolutionary biology, and cherished his copy of The Origin Of Species. His ultimate aim was to transform evolutionary biology into a discipline with the same analytical rigor as physical chemistry. But he wasn't the only major figure on the scene in his era.

Sewall Wright was an American physiological geneticist with a background in animal breeding. While Fisher was a mathematician who sought to apply his skills to evolutionary biology, Wright was a biologist who taught himself mathematics to further his own understanding of evolutionary processes. The two were in many ways the Yin and the Yang of early population genetics, with their conflicts and disagreements being termed the Wright-Fisher controversies, and the common formal framework which they converged upon becoming the ubiquitous Wright-Fisher model. Wright's life spanned 99 years, from 1889 to 1988. His biography, both personal and scientific, are explored in rich detail in Will Provine's Sewall Wright and Evolutionary Biology. Because of the length and breadth of his influence in evolution it's worth reading just to get a sense of how Wright shaped the Modern Neo-Darwinian Synthesis behind the scenes. Provine seems to indicate that Wright was the primary theoretical influence on Theodosius Dobzhansky,* who mentored a whole generation of evolutionary biologists to come (e.g., Dobzhansky → Lewontin → Coyne). If I may make recourse to analogy, if R. A. Fisher was the Alfred Marshall of evolution, Sewall Wright's mentality seems more characteristic of Thorstein Veblen's work. Fisher's aim was to formulate elegant and simple general principles which would explain evolutionary process top to bottom. His fundamental theorem of natural selection, "The rate of increase in fitness of any organism at any time is equal to its genetic variance in fitness at that time," was perhaps the best example of Fisher's grand general ambitions. Wright, by origin an experimental biologist, certainly aimed for grandeur, but I can not perceive in him the yearning for a clean concise elegance which discards the sloppiness he saw in evolution as it played out in the laboratory. This inability to ignore the detail was a "bug" which he in some ways turned into a feature when it came to his theorization of evolutionary process. Many of the ideas which would be the focus of Wright's career, and later shape the outlook of his acolytes, can be found in a 1932 paper The roles of mutation, inbreeding, crossbreeding and selection in evolution. In this paper Wright introduces concepts which are still with us today, and reviews the state of knowledge at the time. Some of his observations are almost amusing now 80 years later. He suggests that multicellular organisms likely have more than 1,000 genes. Wright also alludes to concepts such as allopatric speciation and postzygotic reproductive isolation which have spawned an enormous literature, and are the stuff of careers..

But the core of the paper seem to be the adaptive landscape and the shifting balance. What is the adaptive landscape? If you follow Will Provine's reading no one really knows! OK, to be fair, the landscapes usually describe a topography where fitness is on the vertical y-axis, and x and z are frequencies of genes, or perhaps phenotypes. But are they frequencies within a whole population? Or do they represent genotypic combinations within individuals? Over the decades of the utilization of the metaphor Provine indicates that Wright and his students had different ideas of what the metaphor was in the specifics, suggesting its Rashomon-like aspects. The idea of landscapes across which evolution traverses over time is a very easy to visualize, but making use of the framework in a concrete sense is more difficult. This was especially so in the days before computer programs which could produce beautiful multi-dimensional visualizations.

To the right you see a primitive representation of a fitness landscape from Wright's paper. The y & x axis are different genes, and at their intersection you have a gene-gene combination. There are several ideas at work in these evolutionary landscapes. The first of them are gene-gene interactions, epistasis. It is often asserted that Wright and Fisher disagreed on the importance of epistasis in evolution, with Wright arguing that these interactions were critical, and Fisher dismissing their long term importance. There are other interpretations, and much of the disagreement may actually have been more about fine weights than the basic thrust of their positions. But the general sketch is that biologists in the Fisherian tradition emphasize gradual continuous evolution through selection on additive genetic variance across genes of small effect through natural selection (I understand that this is somewhat a caricature of Fisher's own views, and most of his intellectual descendants view this description as the creation of their critics, but that's the perception). The Wrightian tradition is more pluralistic, and frankly somewhat confused because different thinkers have different spins (e.g., epistasis vs. drift). But in general it suggests that factors such as population substructure, gene-gene interaction, and random genetic drift, all play crucial roles in evolution. The partisans of contingency in evolutionary process and the importance of specific genetic architecture in constraining and shaping the arc of change would likely get more sympathy from Wright.

For Sewall Wright the specific nature of the fitness topography is critical in shaping how evolution plays out on the genetic level. If the topography is "rugged" so that there are many fitness peaks and valleys of disparate values along the y-axis, then populations may become "trapped" on a lower peak which is separated from the higher one by a valley. The movement of a population along the adaptive landscape clearly has a temporal interpretation, and so one can see how contingency and history are critical. Where you start out from may constrain where you can end up. At least, if you rely on conventional deterministic processes such as natural selection on a single locus. This is where Wright suggests that populations structured so that their effective sizes are smaller can evolve much faster, and leap across the valley's so to speak, through the action of random genetic drift. It may be that to attain a given gene-gene combination (or gene-gene-gene-gene, etc.) is nearly an impossible proposition in a deterministic framework where one has to proceed on a step-by-step basis, but through the luck of random genetic drift one can envisage the odds being reduced by a few chance deviations in allele frequency. Because Wright posits that much of evolution occurs by scaling a sequence of distinct and disparate adaptive peaks, he implicitly rejects gradualism and embraces discontinuity and rapid bursts of evolution. This sort of process occurs in a situation with moderate population substructure, so that effective population size is reduced within demes which then can "peak shift" more frequently, but, with enough population-to-population interaction that inbreeding does not drive mutational meltdown or pedigree collapse. When a subpopulation reaches a particularly fortuitous adaptive peak, then it enters a phase of demographic expansion, and it can replace all the other demes of conspecifics (or at least genetically assimilate them to a great degree). This is where Sewall Wright introduces intergroup selection, or more colloquially group selection. Here Wright and Fisher part company again, naturally. Fisher believed that individual level selection was sufficient to explain evolutionary process, while Wright clearly did not. The debate between those who believe that group selection is a significant force in evolution, and those who do not, continues to this day (group selectionists now have a more general model, multilevel selection theory). Epistasis. Drift. Moderate population structure and migration. Add to the mix mutation and selection, as well as the fact that the adaptive topography itself is in constant flux, and Wright already has the beginnings of a strong brew in The roles of mutation, inbreeding, crossbreeding and selection in evolution. I've only glanced over a few of the points. In other sections Wright touches upon what would one day become mutational meltdown, as well as the nature of speciation. There are many disparate threads here which would eventually lead into a range of disparate research programs. So with that I want to get to my "human obsession." Near the end of the paper Sewall Wright seems to offer that the emergence of our own species could be well characterized by a shifting balance model. I suspect that Wright may be right on this. The movement out of Africa was a great pulse, where one human lineage seems to have rapidly replaced or genetically assimilated all the others. Human populations do have substructure, but they also exchange genes, and leapfrog each other. Our cultures may be the perfect vehicles for intergroup selection on the memetic, if not genetic, level (between group variance in memes can be much greater than on genes). I suspect this is not going to be age where elegant one-size-fits-all theories are going to be of particular use, so we might want to dig back into Wright's diverse set of ideas.

* More directly though he came out of the Morgan lab. Citation:

Sewall Wright (1932). The roles of mutation, inbreeding, crossbreeding and selection in evolution Proceedings of The Sixth International Congress of Genetics, 1