A Tale of Two Viruses: Why AIDS Was Pinned to HIV, but Chronic Fatigue Remains a Mystery 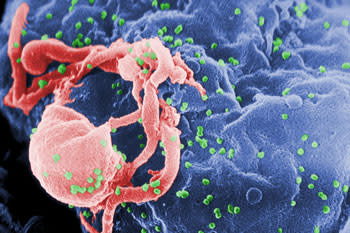 Vincent Racaniello is Higgins Professor of Microbiology & Immunology at Columbia University, where he oversees research on viruses that cause common colds and poliomyelitis. He teaches virology to undergraduate, graduate, medical, dental, and nursing students, and writes about viruses at virology.ws.

The detection of a new virus called XMRV

in the blood of patients with chronic fatigue syndrome

(CFS) in 2009 raised hope that a long-sought cause of the disease, whose central characteristic is extreme tiredness that lasts for at least six months, had been finally found. But that hypothesis has dramatically

in recent months. Its public demise brings to mind an instance when a virus *was* successfully determined to be behind a mysterious scourge: the case of HIV and AIDS. How are these two diseases different—how was it that stringent lab tests and epidemiology ruled one of these viruses out, and one of them in? The first inklings of the disease now called AIDS surfaced in Los Angeles in the summer of 1981. The 5 June 1981 issue

of Morbidity and Mortality Weekly Report described 5 homosexual men with Pneumocystis carinii pneumonia (abbreviated PCP), normally only observed in individuals with weakened immune systems. The article suggested the possibility of an immune dysfunction related to exposure to something that would make individuals vulnerable to opportunistic infections. Soon clusters of PCP and Kaposi’s sarcoma, a rare skin cancer, were observed in gay men in other urban centers. The Centers for Disease Control and Prevention established a simple case definition—Kaposi’s sarcoma or opportunistic infections—and began scouring hospital records. Over time this definition was modified, but its early use identified an ongoing epidemic, and identified groups at risk for the disease as men who have sex with men and injection drug users. The next year the new disease was called AIDS, and soon the U.S. Public Health Service recommended that members of risk groups not donate blood or plasma. Soon came reports that the disease could be acquired by newborn babies from their mothers, and also by heterosexual contact. By the fall there were nearly 700 people who had been diagnosed with AIDS in the U.S., of whom almost 300 had died. The CDC and World Health Organization worked together to publish global data on the disease, and issue recommendations to prevent its spread. During the early years, the epidemiology of AIDS suggested an infectious cause, and in 1983, just two years after the disease was identified, a novel retrovirus

was isolated from a patient at risk for AIDS. A year later a commercial blood test was developed, which allowed comprehensive studies to be done that showed clearly that the virus, later named human immunodeficiency virus type I (HIV-1), was the cause of AIDS. This conclusion was strengthened by the transmission of AIDS to hospital workers when they inoculated themselves with HIV-containing blood by accidental needle sticks. By 1987 the first anti-HIV drug, azidothymidine or AZT, was licensed for the treatment of AIDS. Today over 20 anti-HIV drugs have been approved. When given in combinations of three, the emergence of drug-resistant viral variants is minimized, transforming AIDS from a death sentence to a life-long chronic disease. The story of CFS, generally defined as persistent fatigue of six months or greater not relieved by rest and accompanied by other specific symptoms, is markedly different. This syndrome was first reported in Los Angeles as well, but in 1934. There were subsequent sporadic outbreaks, some of which were reviewed by DA Henderson in 1959

, who noted that females were more frequently affected, and suggested that a virus might be involved. In the 1980s Daniel Peterson identified antibodies against Epstein-Barr virus (EBV) in the blood of a group of CFS patients in Incline Village, Nevada

. The CDC entered the investigation but was unable to confirm that antibodies to the virus were consistently present in patient blood. A subsequent case-control study failed to identify EBV as the causative agent of the disease, which was subsequently named chronic fatigue syndrome. The search for that agent of CFS has continued to be fruitless. In addition to EBV, a host of other viruses have been found in CFS patients, including enteroviruses, measles virus, herpesviruses, and human T-lymphotropic virus type II. However, none have been consistently detected in CFS patients and therefore are not considered to cause the disease. The possibility of a viral cause of CFS re-emerged in 2009 with the detection of a retrovirus called XMRV

in the blood of a substantial fraction of CFS patients. A second laboratory

subsequently identified sequences related to murine leukemia viruses, also retroviruses, in the blood of CFS patients. However, many other laboratories were unable to replicate these findings, and both papers have been retracted

. Why do the stories of AIDS and CFS have such different outcomes? One reason is that it has been difficult to reach a consensus on a clinical definition of CFS. At the onset the case definition of AIDS was simple—“Kaposi’s sarcoma or opportunistic infections”—which made it possible to rapidly and accurately identify new cases, especially among different research groups around the country. This led to the establishment of risk factors, and the epidemiological data obtained from this work made it highly likely that an infectious agent was involved, spurring the search for the causative pathogen. The case definition for CFS has undergone a number of revisions over the years. When different research groups use different definitions of the disease, it becomes difficult to compare findings. Most importantly, there is no indicator or diagnostic test that can be used to identify CFS, and since diagnosing CFS is a long and difficult process, cohorts established by different investigators vary, leading to different findings, confusion, and contention. In contrast, AIDS was readily identifiable and easily diagnosed once a blood test for HIV was developed. Another problem is that in contrast to their excellent work on AIDS, the CDC has stumbled when tackling CFS

. The CDC has dismissed evidence that CFS is an organic disease, and spent funds on investigating psychiatric and trauma-related causes, rather than infectious origins. The agency also diverted funds designated for CFS to other programs. These and other missteps alienated the CFS patient community—the opposite of what the agency accomplished with the AIDS community. In part due to the standardized case definition of AIDS, identification of a candidate virus was relatively rapid. Determining its role in the disease was facilitated by the development of a blood test, which could be used to prove that HIV-1 caused AIDS. The relationship between HIV and AIDS was further confirmed by the development of antiviral drugs that inhibited viral replication and helped alleviate the symptoms of the disease. Why have investigators failed to identify a virus behind CFS? (It is not due to the lack of appropriate technology; this has improved substantially since the 1980s with the development of polymerase chain reaction and rapid DNA sequencing.) One explanation for this dilemma is that an infectious agent does not cause CFS. However, there is plausible evidence for an infectious etiology, including observations that the disease is known to occur in outbreaks. Furthermore, in many cases the onset of symptoms appears to begin with a flu-like illness. Additionally, CFS is a heterogeneous disease, and may be caused by several different agents or a combination of viruses and non-infectious conditions. Another possibility is that an infection initiates an immune response that spirals out of control, leading to CFS symptoms. This scenario implies that at least some CFS patients have underlying deficits in immune regulation. If that’s true, it will be very difficult to identify the virus involved because it will likely have been eliminated from patients’ systems by the time CFS symptoms become apparent. In retrospect, it is clear that the properties of AIDS made it an easy disease to understand. While the path to understanding CFS has been clouded by non-scientific issues, in the end the main reason why we do not understand this disease is because it is extraordinarily complex. But that never stopped a good scientist.