A Robot Assists With 'Supermicrosurgery' For the First Time 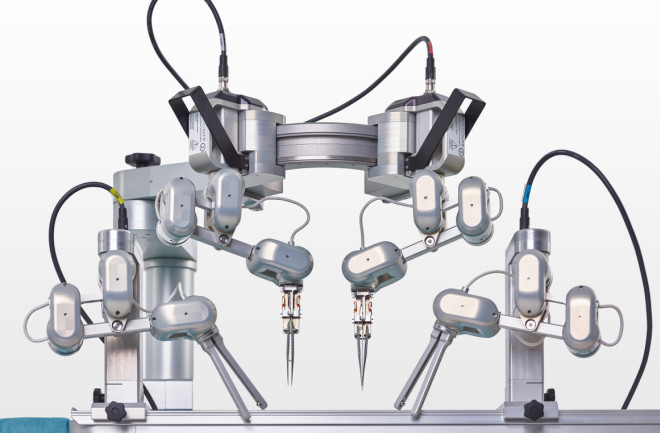 Next to hearing your dentist mutter “oops,” is there anything more disconcerting than hearing your surgeon say it?

Perhaps not. But a new type of robot, developed by researchers at a pair of Dutch universities and put to work for the first time recently in real-life surgeries, could add some sure-handedness in future operating rooms.

“Supermicrosurgery” — a demanding technique involving incisions measuring fractions of a millimeter — “is limited by the precision and dexterity of the surgeon’s hands,” a group of researchers write in a Nature Communications article, published Tuesday and outlining the impact of the new surgical bot.

Employing robots in the operating room isn’t new. The report’s authors note that surgeons lately have grown familiar with a robotic device designed for minimally invasive endoscopic procedures. But that robot has limitations in more delicate maneuvers. For instance, while built to reduce a doctor’s hand tremors, it wasn’t designed to work with the small, super-precise instruments used in microsurgical operations.

Filling what they said was a gap in existing medical technology, surgeons and engineers from the Maastricht University Medical Center and Eindhoven University of Technology — both in The Netherlands — developed “MUSA,” a robot that assists with extremely delicate surgical operations. Besides helping minimize the effects of doctors’ shaking hands, the new technology was also designed to work with standard surgical microscopes and other operating room tools.

For their study, researchers from the same universities that developed the device enlisted 20 women to undergo lymphatico-venous anastomosis — a surgical procedure used to treat a common breast cancer surgery complication. Some of the women in the study underwent a typical operation, going under the knife sans robot. Others got treatment from a surgeon using the new MUSA device.

While Tuesday’s report outlined the first time the robot had been used on human patients, the authors noted more work is needed to show that the study’s results can be repeatable. “Larger multicenter trials, with involvement of multiple trained microsurgeons, are needed to confirm our data,” the researchers wrote.

Nevertheless, the study provides the first bit of proof that a robot can safely lend an “oops”-preventing hand in tight surgical procedures.