A New Green Revolution: Scientists Are Using CRISPR to Re-domesticate Fruits and Vegetables

Gene editing can potentially cram millennia of agricultural progress into the blink of an eye. 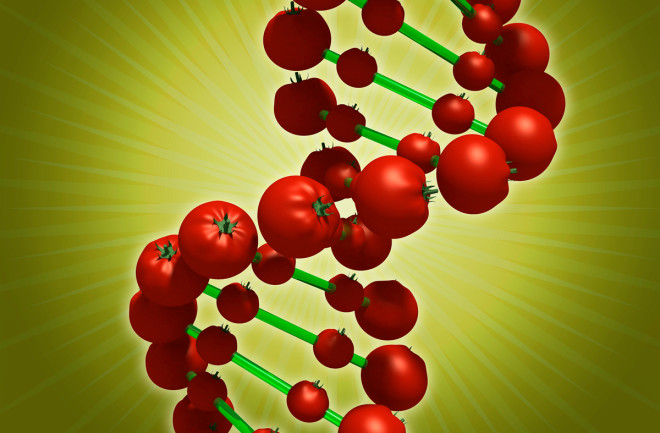 Early in the 20th century, a strange tomato plant took root in the northeastern United States. Because of a random genetic mutation, the plant’s branches were shorter than normal. The result was a more compact crop that was easier to harvest. “Breeders started using it,” says Joyce Van Eck, a plant biologist with Boyce Thompson Institute in New York. “Over time, the trait revolutionized commercial tomato production.”

Most other qualities we associate with tomatoes also arose by chance. Over millennia of selective breeding, the fruit grew from the size of a pea to that of an apple, and ripening was streamlined to ensure supermarket tomatoes were uniformly red. The farmers who had laid claim to these desirable traits inadvertently lost others, such as flavor, nutritional value and drought resistance — dropped by the same random processes that made the fruit commercially viable.

The tomato’s genetic history is typical of produce: Accident has driven the domestication of practically every fruit and vegetable. But Van Eck is one of a growing number of geneticists who envision an alternative approach to cultivation. Labs like hers throughout the world want to reboot history. They’re starting with wild ancestors and relatives of modern crop plants, which have their own appealing features. Then, using a novel gene-editing technology called CRISPR-Cas9, they’re deliberately introducing commercially desirable traits.

The idea was first floated in 2016 when a group including University of São Paulo plant physiologist Lázaro Eustáquio Pereira Peres revealed a plan to re-domesticate tomatoes. In their paper published in Plant Science, they identified several crucial traits, such as fruit size and branch length, and found that the desirable, modern versions of these traits arose when certain genes changed their functions. If they could deliberately edit those genes, they’d essentially get to redo domestication — on their terms.

The CRISPR-Cas9 system, successfully launched in 2013, was perfect for the job. Injected into a cell nucleus, the system finds and removes a predetermined genetic sequence. All Peres had to do was use CRISPR-Cas9 in a wild tomato plant to whittle away the DNA guiding the growth of long shoots. Then he’d have the best of both worlds: A compact plant with ancient traits, like flavor and nutrients.

So, Peres tried it out in the lab. Late last year in Nature Biotechnology, he and several colleagues revealed they’d successfully controlled branch length and improved fruit size and yield. Essential nutrients such as lycopene, an antioxidant, were boosted. And as for flavor? “It’s an intense experience,” says University of Münster geneticist Jörg Kudla, who led the study with Peres. “It’s very aromatic.”

The viability of the technique was verified by another, independent study by researchers at the Chinese Academy of Sciences, also published last year. Using essentially the same technique, they introduced commercially valuable traits while retaining drought resistance in wild tomato plants. These more resilient versions might better withstand the effects of climate change. “The biggest advantage of de novo domestication is the [ability to harness] the numerous natural wild plant resources,” says Chinese Academy of Sciences geneticist Caixia Gao.

But ancestral relatives of modern crops are only the start. In fact, while Kudla and Peres were wrangling tomato plants, Van Eck enlisted CRISPR to improve the commercial prospects of ground cherries.

A distant tomato relative sold in farmers markets, the ground cherry is intensely flavorful, highly nutritious and extremely impractical. The fruit is minuscule and drops off the branch when ripe, making it nearly impossible to harvest. Van Eck’s group fixed these problems by comparing genes of ground cherries with genes of domesticated tomatoes, singling out ones that were similar, and altering them. “Instead of waiting for happenstance, we fast-tracked domestication,” she says.

Meanwhile, people have started contacting Van Eck with other prospective crops. “I was approached by somebody from Nigeria who said they have an indigenous grain that’s naturally drought resistant,” she says. It doesn’t produce many seeds, and the plant has an unwieldy growth pattern that makes it tricky to harvest. Her lab is now investigating mutations that would make it more suitable for harvesting.

With the ability to guide plants down different paths of cultivation, or to explore what would happen if our ancestors had picked different crops, CRISPR has turned speculation into reality — just in time for a future that will have more mouths to feed than ever before.

[This story originally appeared in print as "Domestication 2.0"]