A More Scientific Obesity Test Says: It's Even Worse Than You Think

The widely used Body Mass Index (BMI) is crude and should be replaced; here's a more modern suggestion. 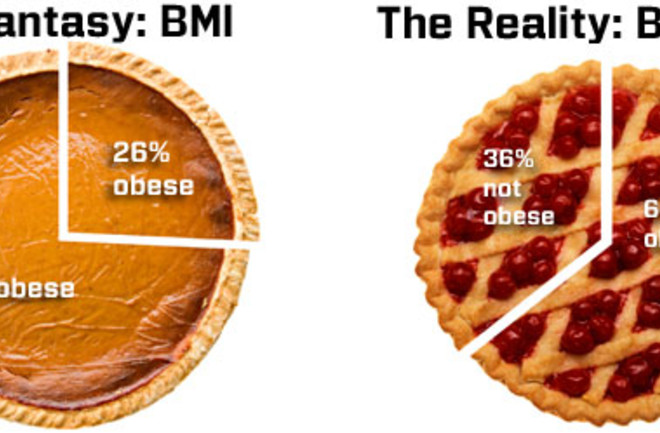 Obesity is a major public health threat, yet doctors assess it using a 200-year-old comparison of weight and height called the Body Mass Index, or BMI. In April, researchers Nirav Shah and Eric Braverman revealed BMI’s flaws. They studied 1,400 people and compared their BMI with a definitive measure: body fat percentage, determined by X-ray scans. BMI correctly predicted whether a person was obese (25 percent fat for men, 30 percent for women) just three-fifths of the time, and it was particularly inaccurate for women. The researchers propose changing the BMI obesity threshold (now at 30) to 24 for women, 28 for men. They also advise people to consider a body fat scan and a blood test for the hunger-suppressing hormone leptin.

There are 116 million women in the United States.

More From Discover
The Sciences
Who Were Scotland’s Mysterious ‘Bodies in the Bog’?
Health
Therapy on a Plate: How Your Diet Can Benefit Your Mental Health
Mind
A Promising Treatment for Mental Disorders: Fecal Matter Transplants
Health
Breast Milk Alternatives Aren't a Modern Invention
Environment
Could Humans Grow Food During a Nuclear Winter?
Health
Why Do Humans Have a Taste For Alcohol?
Recommendations From Our Store
My Science ShopDiscover STEM Kits
My Science ShopDiscover 2022 Calendar
My Science ShopStrange Science
My Science ShopElements Flashcards
Shop Now
Stay Curious
Join
Our List