A Molecule That Can Help Antibiotics Kill Superbugs 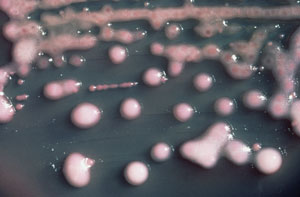 Bacteria that have evolved defenses against antibiotics are something of a disaster waiting to happen. Whenever a new drug-resistant strain, or a gene that confers resistance, crops up in a new place---as when the NDM-1 gene, which confers resistant to up to 14 drugs, showed up in drinking water in New Delhi

---it's another nail in coffin of a world in which we can heal nearly everything. Scientists are looking into how to get around that resistance, though, and there are some hopeful headlines now and then, including a recent study

from researchers at North Carolina State University in which they identified a molecule that can boost the efficacy of two antibiotics against bacteria 16-fold. The molecule, which the researchers found by testing about 50 candidates to see if they could reduce the number of NDM-1-carrying K. pneumoniae

by a significant amount, doesn't have any antimicrobial properties of its own. It's an adjuvant

, which means it has to be applied in tandem with another drug to have any effect---in this case, the antibiotics carbapenem and cephalosporin. The researchers checked a couple of different ways that it could be working, and found that it was making bacterial membranes easier for the drug to get through, but not enough to account for all of its surprising strength: it lowered by 16 times the amount of antibiotic required to knock the bacteria on their behinds. That's handy, because taking massive amounts of antibiotics---enough to overwhelm the defenses of resistant bacteria---can be hazardous to your health, and if adding in this adjuvant tips the scales so that safe amounts can knock out infections, that's pretty neat. As an antibiotic sidekick, it's definitely still on the mysterious side. But the team writes that they are looking further into its mechanism, so stay tuned.