A mathematical model of "Pride and Prejudice." 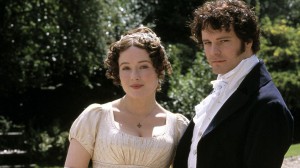 Do you like math? Are you a fan of "Pride and Prejudice"? Then have we got the paper for you! Here, the authors propose a set of differential equations that describe the romance between Elizabeth and Darcy. Apparently, the mathematical model of their love story is characterized by a "saddle-node bifurcation"; according to the authors, "A series of small discoveries can give rise to a sudden turning-point in the development of a love story. In mathematical terms these turning-points are nothing but so-called catastrophes, which, in the case of Pride and Prejudice, are technically revealed by the existence of a saddle-node bifurcation." For more details on the model, check out the figure and text below. We just wonder if there is a mathematical model that explains why Colin Firth is the best Darcy?A mathematical model of 'pride and prejudice'. "A mathematical model is proposed for interpreting the love story between Elizabeth and Darcy portrayed by Jane Austen in the popular novel Pride and Prejudice. The analysis shows that the story is characterized by a sudden explosion of sentimental involvements, revealed by the existence of a saddle-node bifurcation in the model. The paper is interesting not only because it deals for the first time with catastrophic bifurcations in romantic relation-ships, but also because it enriches the list of examples in which love stories are described through ordinary differential equations." Bonus figure and excerpt from the main text: 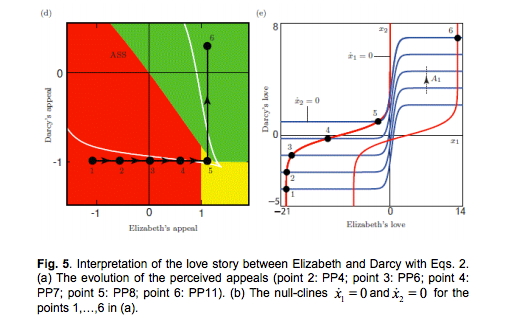 "The love story between Elizabeth and Darcy can be perfectly interpreted with Eqs. 2, provided suitable values are assigned to the parameters of the model. The appeal A1 of Elizabeth (perceived by Darcy) is initially low (PP3) but then increases at each encounter, where she shows, with no exception, her grace and talent (PP5,...,8). In contrast, the appeal A2 of Darcy (perceived by Elizabeth) remains negative, in view of the prejudices she has against the rich and the nobel. It is therefore licit to imagine that the evolution of the love story is the result of a recursive increase of A1 followed by a final sudden increase of A2 (due to the revealing letter of Darcy), as shown in Fig. 5a. At the beginning of the story (PP2,3,4) the representative point in the space of the appeals is point 1 in the red region of Fig. 5a where Elizabeth and Darcy are in an antagonistic relationship. When the perception A1 of Elizabeth's appeal increases (see points 2,3,4,5 in Fig. 5a) nothing relevant occurs though Darcy's involvement is positive at point 5 (see PP9). At that point Elizabeth is still antagonistic and, indeed, she refuses to marry him (PP10). It is only Darcy's letter that suddenly reveals to Elizabeth the rectitude of her lover. This is represented as a vertical jump in the space of the appeals from point 5 to point 6 in the green region of Fig. 5a where the two lovers can only be in a positive relationship. In other words, as a consequence of the letter the upper saddle-node bifurcation curve is crossed from below and this crossing implies a discontinuous jump from x' to x''' in the feelings of Elizabeth and Darcy (PP12,...,15)." Related content: NCBI ROFL flashback: Will your love last? This mathematical model may hold the answer…Flashback Friday: Clueless doctor sleeps through math class, reinvents calculus…and names it after herself.NCBI ROFL: Doing math in a Speedo is always a bad idea.