A Herald of the AIDS Epidemic

Epidemics do not simply appear out of nowhere. They can simmer for months, isolated within a small segment of a population, escaping the notice of the public health community before boiling over into the larger community, triggering the identification of a spreading contagion. Too often, those individuals who recognize a nascent threat of outbreak and sound the alarm do not receive the public recognition they deserve. There is, however, a recent and well-deserved exception to this rule: published last month in the CDC’s Emerging Infectious Disease

journal is an obituary to Sandy Lee Ford, a public health worker and drug technician who was the first person to alert the U.S. government to the emerging HIV/AIDS epidemic in 1981.

In January 1979, Sandy took a position in the Parasitic Diseases Division in the Centers for Disease Control, now the Centers for Disease Control and Prevention (CDC). Her job was to respond to requests for drugs that CDC provided through the Parasitic Diseases Drug Service (PDDS) One of the 10 drugs in the armamentarium of the PDDS was pentamidine isethionate, which was intended to treat rare, imported cases of African trypanosomiasis. An unanticipated need for pentamidine was its use in treating Pneumocystis carinii pneumonia, now known as Pneumocystis jiroveci pneumonia or Pneumocystis pneumonia (PCP)(1). 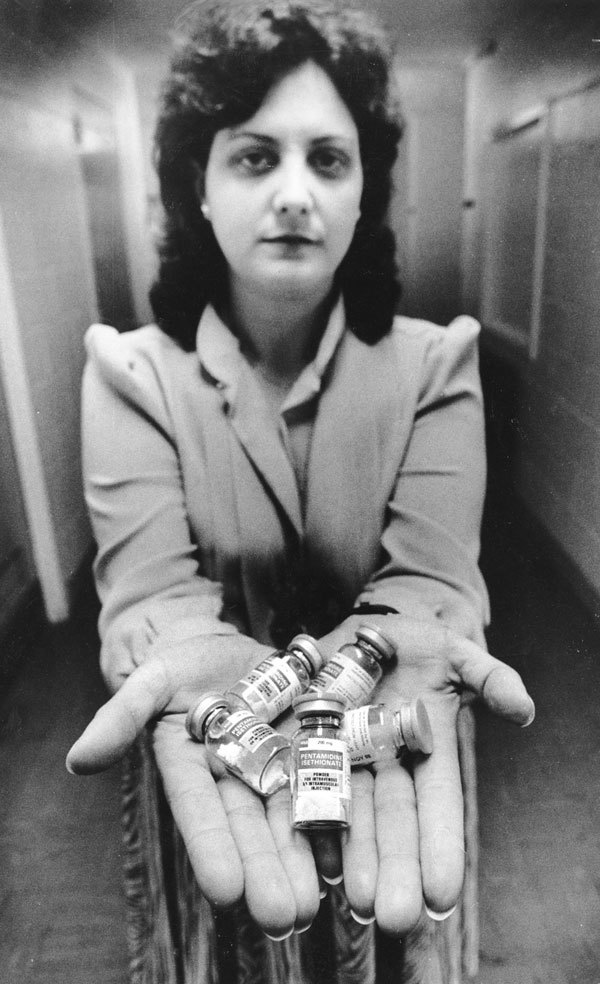 Sandy Lee Ford with vials of pentamidine to be distributed to patients with Pneumocystis pneumonia. Image: CDC. At that time, pentamidine was not officially licensed for clinical usage in the United States and was accessible only through an investigational drug license with the Food and Drug Administration (FDA)(2). The CDC stockpiled precious reserves of the drug in Atlanta, GA and distributed vials across the United States. Ford filled around 80 to 90 orders a year for this rare antibiotic, speaking directly with physicians requesting the drug for either young children with serious immune system disorders or adults on powerful immunosuppressive treatments, either following organ transplants or for the treatment of lymphomas. Pentamidine was reserved for the seriously ill, its usage strictly controlled for children and adults suffering from a double-whammy of an immunological condition and a funky pneumonia.In early 1981, Ford began to receive an unusually high number of requests for pentamidine. The treatment was intended for an unprecedented type of patient, too - previously healthy young gay men infected with Pneumocystis pneumonia due to some form of immune suppression, as yet unidentified. Over a period of weeks, physicians from across the United States were calling in with the same request and the same curious story (3). A single pentamidine request for this type of patient was highly unusual, but a snowballing cluster was cause for alarm. In late April, she drafted a memo to her supervisor, the deputy director of parasitic diseases, alerting him to this strange influx of requests. It would be described as the “opening salvo for the AIDS epidemic,” the first time that a federal agency received an official notification about a burgeoning, little understood epidemic that would change the world (4).Sandy Lee Ford’s obituary is a testament to a single person’s keen eye, meticulousness, and devotion to supporting the care of critically ill patients. She served at the CDC for 34 years, and is remembered by her peers as “a herald of the AIDS epidemic” and for the dedication and dignity with which she conducted her work. Dr. Myron G. Schultz, founder of the PDDS, gracefully memorializes Ford’s achievements with a quote from the Proverbs of Solomon: “Wherever people gather, her deeds speak her praise.”Previously on Body HorrorsJune 5, 1981. Pneumocystis Pneumonia. Los Angeles.The Sea Has Neither Sense Nor Pity: the Earliest Known Cases of AIDS in the Pre-AIDS EraSex, War & Revolution: The Epidemiology of Gonorrhea in the USAReferences 1) MG Schultz & AB Bloch. (2016) Sandy Ford (1950–2015) [in memoriam]. Emerg Infect Dis. http://dx.doi.org/10.3201/eid2204.151336 2) R Shilts. (1987) And the band played on: Politics, people, and the AIDS epidemic. New York: St. Martin's Press 3) C McPheeters (2009) AIDS: The Early Years. 2009 AHS Capstone Projects, Paper 5. Accessed online on 30/04/2016 at http://digitalcommons.olin.edu/ahs_capstone_2009/5 4) S Roberts (March 5, 2016) Dr. Myron G. Schultz, Who Helped Identify AIDS Crisis, Dies at 81. New York Times. Accessed online on 30/04/2016 http://www.nytimes.com/2016/03/06/health/dr-myron-g-schultz-who-helped-identify-aids-crisis-dies-at-81.html?_r=0