A Frank Look at Female Orgasms and Rabbits 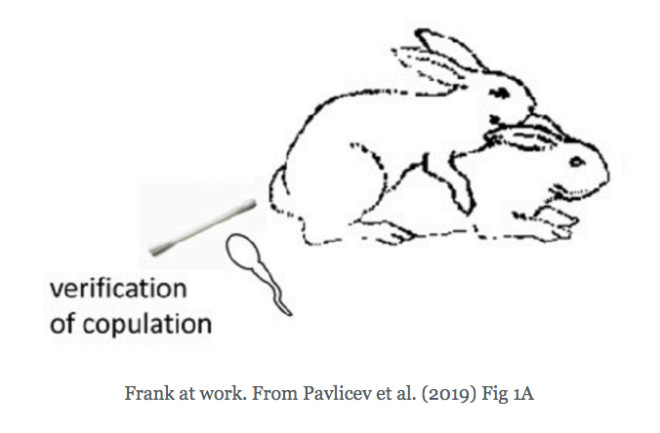 A very weak paper in PNAS has attracted some attention lately: An experimental test of the ovulatory homolog model of female orgasm

The paper aims to be a test of the hypothesis that the human female orgasm is a kind of evolutionary relic from an earlier stage in evolution.

In humans, ovulation happens on a monthly cycle and is not related to sexual activity. However, in some mammal species, such as rabbits, ovulation is triggered by sex (or copulation, as biologists say). In the new paper, authors Mihaela Pavlicev et al. argue that humans evolved from animals with copulation-induced ovulation (CIO), which later became the female orgasm.

The female orgasm being notoriously mysterious, you can see why this idea has made headlines, but unfortunately the evidence in the paper is extremely thin.

To test their hypothesis, Pavlicev et al. gave female rabbits the SSRI antidepressant fluoxetine (Prozac) for 2 weeks before allowing them to mate with a male rabbit (called “Frank”, we’re told) before having their ovaries examined for signs of ovulation. The logic was that SSRIs are known to inhibit or delay orgasm in human women, so if they also inhibit CIO in rabbits, that would be evidence that human orgasm and rabbit CIO are somehow linked.

This is not a completely crazy scientific logic, although it’s far from being “an experimental test” of the hypothesis like the title of the paper promises: I would say the evidence from this study would be at best suggestive. But it’s not even that, because the sample size was so small.

In the main experiment (Experiment 1), there were only 12 rabbits in the fluoxetine group and 9 in the control group. This is a tiny sample. In fact, those groups were were divided into two even smaller groups for drug doses (2 mg/kg and 4 mg/kg fluoxetine).

The effect of fluoxetine on COI was not significant in either group alone; it was significant p<0.01 in the pooled group, but with this sample size, I’d be extremely wary of that. The effect was larger in the lower dose group, which is odd.

The authors also reveal that, “to our surprise”, the rabbits had zero detectable levels of fluoxetine in their bloodstream at the end of the two weeks, despite being dosed daily. I would say that this is a bit of a problem and perhaps calls the results into further question.

Overall, this seems more like a early pilot experiment than a finished scientific study. The authors should repeat the experiment with a much larger sample size and a different SSRI (one that isn’t metabolized so quickly in rabbits) if they’re serious about testing their hypothesis. I am surprised that this paper appeared in PNAS.