A Formula for Hate: Captain Planet & the Planeteer's HIV Episode

Earth! Fire! Wind! Water! Heart! "Captain Planet and Planeteers" is a classic of 1990s television and may soon appear on the big screen as a live-action movie. The animated television series featured five earnest teenagers equipped with magical powers fighting eco-villains intent on destroying the ozone, rainforest and the wetlands and guided by the sage wisdom of Gaia, the spirit of Earth, and Captain Planet. Today, the program is recognized for its environmental "edutainment" pitch and the emerald-mulleted, square-jawed appearance of its titular superhero. 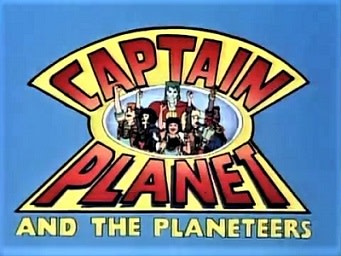 Captain Planet and the Planeteers title card from the first episode. Image: 1990 Program TBS Productions, Inc. and DIC Enterprises, Inc. Protecting the various ecosystems of the planet from floridly named villains - including Hoggish Greedly, Sly Sludge, Looten Plunder, and Duke Nukem - were not the only weekly missions encountered by the Planeteers. The quintet also found time to spread a public health message and drop some HIV/AIDS knowledge on its young viewers. The 11th episode in the third series of the six-year program aired an episode, "A Formula for Hate," on November 21, 1992 that focused on a HIV-infected youngster rejected by his community. The plot rundown is as follows: Verminous Skumm, one of the hallmark villains of the series, has discovered that a high school basketball star by the name of Todd Andrews, voiced by Neil Patrick Harris!, is infected with HIV. Skumm has broken into a physician's office, rifled through patient medical records and chanced on Todd's record and his recent HIV diagnosis. Whoa now! Can we say HIPAA violation? In the episode, Todd's physician explains to the young man and his mother - shakily voiced by guest star Elizabeth Taylor, the actress and longtime AIDS activist who passed away in 2011 - that HIV is spread through "using drugs with needles, unprotected sex or from that blood transfusion you had a few years back," surely a pivotal, uncensored moment in children's animated cartoons. Meanwhile in his sewage lair, Skumm makes photocopies of Todd's face with the word AIDS in bright red letters splashed across it, a sort of scarlet photocopy. His objective?

Once we let people know the kid has AIDS, we can panic the whole town. When people panic, they don't think. If they don't think, they stay stupid about AIDS and it can spread. And once it spreads far enough, we can take over the earth.

Skumm has "discovered the formula for hate" and has discovered a foolproof plan for world domination. Let's make this quick: Todd, bullied by his classmates and rejected by his community, makes a baffling choice to … wait for it … escape by canoe to a bayou swamp cabin. Following a hallucinogenic sequence of tormenting dreams, he makes the decision to return home and face his bullies only to discover his canoe has drifted away thanks to Skumm. The Planeteers and Captain Planet stage a rescue and bring him to a basketball game in which they educate the public on the realities of HIV transmission. The twenty-minute episode ends with a brief sermon by Gaia and the program's familiar refrain, " Remember the power is yours!" This episode is one of the earliest occasions that a cartoon addressed the issue of HIV/AIDS directly to children, broadcasting a message of compassion and understanding. At the time of the episode's broadcast in 1991, an estimated 3000 children were infected with the virus in the United States (1). Many were healthy enough to attend daycare facilities and schools raising concerns among parents and educators at a time in which little was known about the communicability of the virus. In 1987, five years before "A Formula for Hate" aired, the family home of the Ray brothers, hemophiliacs aged 8 through 10 infected with HIV from contaminated blood products, had been torched by arsonists furious at the Ray family's legal efforts to enroll their children in a local Florida school. In 1990, Ryan White, the poster child for pediatric HIV and a victim of HIV-based discrimination, died from complications of the disease. He had also acquired the infection from blood transfusions to control his hemophilia. "A Formula for Hate" is one example of a trend in the early 1990s to process the sweeping effects of the HIV/AIDS epidemic that left no stone unturned in its ruthless ubiquitousness, infecting even children. The subject is handled a bit clumsily - a rodent villain trying to take over the world using HIV as his weapon of choice, really? - but the overarching goal and message is sincere: educating young viewers on the importance of dignity and respect for children at the greatest risk of bullying and stigmatization. Protect yourself with knowledge and remember: with our powers combined, we can fight the stigma against HIV/AIDS! Resources On June 27, 2013, Sony Pictures announced that they are currently producing a live-action movie based on Captain Planet. Get ready, guys! Shawn Decker briefly recounts the story of the Ray brothers at his blog covering aspects of HIV infection. The author himself was expelled from school on account of his HIV-positive status. References 1) H Taras. (1988) AIDS in schools and day-care centers. West J Med.149(4): 451–452