A DNA Analyzer That Fits in Your Pocket 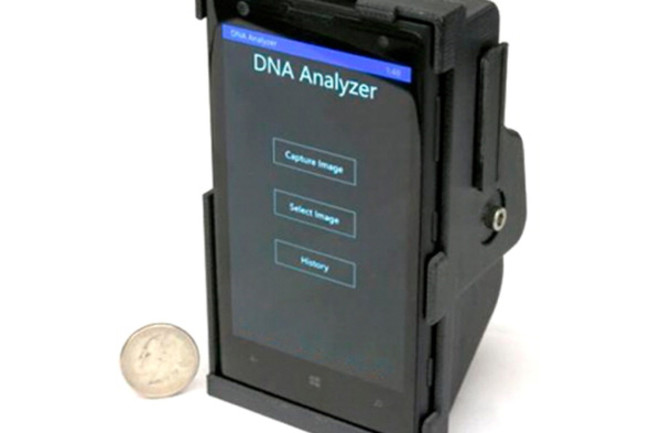 Our DNA defines us, but it can also betray us. Sections of our genetic code that get deleted or duplicated when DNA is copied — errors known as copy-number variations — may increase our susceptibility to afflictions like Alzheimer’s disease and malaria.

Engineer Aydogan Ozcan and his team created their mobile microscopy unit by souping up the camera of a Nokia Lumia 1020 smartphone. They attached an external lens, filters, focuser and laser, adding less than 7 ounces. After placing a DNA sample on a glass coverslip, the researchers use the laser to excite the DNA molecules and make them visible. The smartphone’s camera then snaps a picture of the coverslip through its lenses and filters. Finally, the image is sent to a UCLA server for digital processing.

Individual DNA molecules show up in this smartphone photo at left and the traditional, and more expensive, lab-produced image at right. The researchers superimposed red lines to denote DNA length. | Ozcan Research Lab at UCLA

Ozcan and his colleagues demonstrated that their $400 setup could identify copy-number variations and, subsequently, disease risk, replacing detection methods that require hundreds of thousands of dollars of equipment. Medical staff practicing in rural or resource-limited environments would benefit the most from this immediate and low-cost risk assessment, Ozcan suggests.

[This article originally appeared in print as "A Lab in Your Pocket."]