A Creepy Monster of the Forest: The Albino, Vampiric Redwood Tree 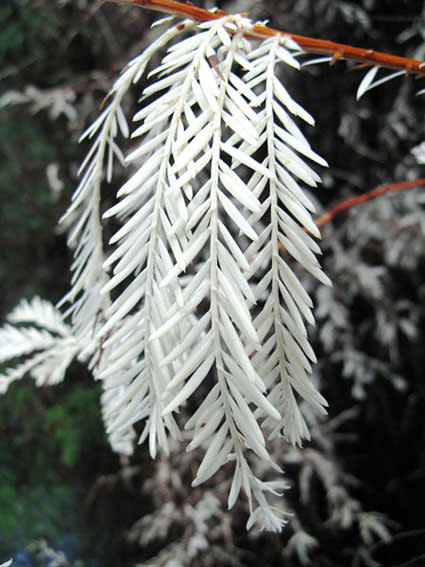 Organisms with albino mutations are pretty weird in general, but albino plants are extra weird. Ultra-rare albino redwood trees completely lack the green pigment chlorophyll, which they need to live (by photosynthesizing nutrients from light). These plants are literally vampires. They are pale (everwhite instead of evergreen), and they survive by sucking the life from other trees. These vampires remain attached to the roots of their healthy, normal, parent trees (coastal redwoods can reproduce asexually by sprouting new shoots from roots or stumps), and survive by sucking energy from them. They can keep this up for a century. Historian Sandy Lyndon explained the phenomenon to KQED:

"Albinism is a genetic mutation that prevents cells from producing pigment. In humans and other animals, albinism is not necessarily such a big deal. But albino plants are unable to do the very thing that makes a plant a plant. Without chlorophyll, they can't photosynthesize, meaning they can't convert sunlight into energy. The only reason that albino redwoods survive at all is that they are connected at the root to a parent tree from which they will suck energy for their entire lives."

Only about 25 of these trees are known to exist around the world, eight of which are at Henry Cowell State Park in California, where rangers and researchers from Stanford University and UC Santa Cruz are studying them, as KQED

Their needles are limp and waxy. They're the exact color of a glow-in-the-dark star you might find in a kid's bedroom. And while no one really knows for sure, albino redwood trees may be extremely rare.... And yet, eight of them live here. This park has the largest known concentration of albino redwoods anywhere, and that makes it the epicenter for a scientific mystery.

The redwood is a genetic mixing barrel--with six sets of chromosomes, the species can mix and match, experimenting with different combinations and allowing quick adaptations to fight off fungus and viruses that could otherwise decimate the population. Albinism just seems to be one of the more evolutionarily unsuccessful experiments these trees have performed, though they keep coming back, park docent Dave Kuty explained to the San Jose Mercury News

When times get tough, the parent tree withdraws all support and the seedlings perish, turning brown. In times of abundant rain, they sprout again, flourishing. "They come and go, like ghosts," Kuty said. "They starve to death and shrink back. Then they reappear."

Discoblog: Too Strange to be True? Tree Found Growing in Man’s Lung

DISCOVER: The Life, Death, and Life of a Tree