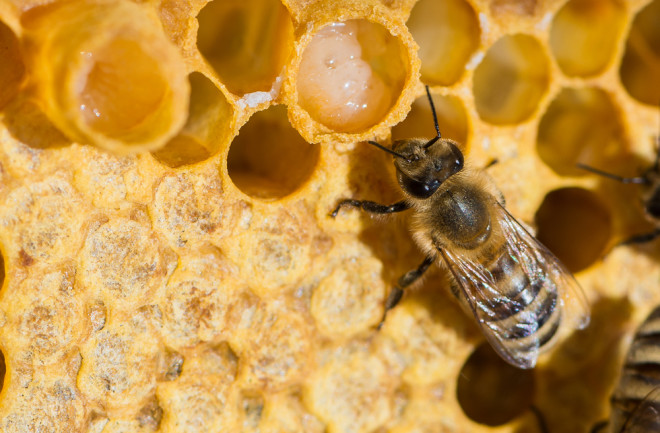 A queen bee cup with royal jelly in the wax comb of the honey bee (Apis mellifera). (Credit: Mirko Graul/Shutterstock)

Scientists have announced a breakthrough in stem cell research that could have major implications for medical treatments that involve regenerating human cells. And their discovery came from an unlikely source: royal jelly. It’s the same substance honey bees use to turn a common bee larvae into a queen.

A queen bee starts her life just like any other bee – a larva in the honey bee hive, taken care of by her siblings. But when it’s time for a new queen, this larva is pulled aside and fed copious amounts of royal jelly, a nutritious goop secreted by the hive’s nurse bees. This, rather than any genetic differences, is what makes her a queen.

This queen bee grows larger than the other bees in the hive, which means she ends up with substantially more cells in her body, despite being genetically similar to her sisters. Royal jelly is thought to increase her cell count by somehow triggering an increase in stem cells — cells that haven’t yet differentiated into specialized cells — early in her development.

Royal jelly is popular as a dietary supplement in many areas of the world. Though many of the claimed effects on human health are of dubious merit, a few have been supported by randomized controlled trials. The latter inspired researchers to examine what effects the jelly might have outside of a bee hive.

Now, a research team out of Stanford University has found that the active compound in royal jelly, royalactin, prevents stem cells from differentiating, or growing into mature versions of, say, muscle or skin cells. This means that as they continue to grow and multiply they create more stem cells, increasing their therapeutic potential.

If You Give a Mouse Royalactin

Kevin Wang, an assistant professor of dermatology, was the principal investigator on the study, which came out today in Nature Communications. He says that because of royalactin’s role in queen formation, and the rumors of regenerative human properties, it made sense to test it on stem cells. They used embryonic stem cells from a mouse for their experiments.

“This was a giant leap of faith,” says Wang.

They made royalactin in the lab rather than harvesting it from bee hives. “We would bankrupt our whole department if we used real royalactin,” says Wang. “To get that much royalactin we’d need gallons and gallons of royal jelly.”

In the end, the royalactin worked as hoped – it triggered a cellular response that made the stem cells self-renew. As the cells divided and multiplied, they all remained stem cells.

The Quest for Human Royalactin

The researchers suspected that the reason the mouse stem cells responded to royalactin was that there was an analogous compound — a protein with the same shape — naturally occurring in mice.

They found that mouse-made key – the mammalian analog to royalactin – by using an algorithm to search through every single protein secreted by humans, looking for one that matched the shape of royalactin.

They found one – and only one – protein that fit the bill. Nearly nothing was known about this protein except that it existed. And that it is expressed only briefly, very early on in human development.

What do you name a newly discovered human queen bee compound?

“I wanted to name it ‘Beyoncé’ for ‘Queen Bey’ but the Nature Communicationseditor was strongly against it, which was too bad,” explains Wang. Instead, the team settled on “regina,” Latin for “queen.”

Wang’s dream is that the regina discovery will lead to advances in stem cell-based medical treatments. A patient recovering from a stroke, heart attack, Alzheimer’s, or a stomach ulcer might receive a stent, delivering regina directly to the area and allowing more stem cells to grow there, potentially speeding up recovery. Of course, this dream is far from reality, and much more research will be needed to figure out the true potential of the molecule.

For now, regina and royalactin can still be used as new stem cell renewal factors. These are the compounds added to stem cells in culture that keep them undifferentiated stem cells. Wang suspects these compounds are equal to, if not better than, the chemicals that are currently used for this task.