A Cheap, Fast, Portable Way to Diagnose Disease in the Developing World

In many places, clinics lack the tools to do blood tests, costing time, money, and lives. 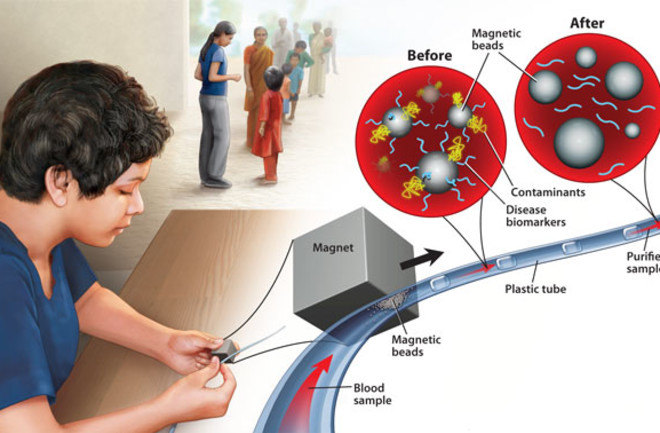 When biomedical engineer Rick Haselton visited New Delhi’s largest public hospital last year, he saw glaring inefficiencies. One of the biggest: Patients were traveling great distances and staying for days just to get routine blood tests for infection. They had no choice, since many outlying regions lacked well-equipped reference labs and tools to purify samples. But if remote clinics could handle the testing, Haselton thought, then the hospital could focus on the sick while the rest stayed home.

The solution, developed by Haselton and colleagues at Vanderbilt University, was the extractionator, a tool that keeps body fluids sterile while tiny magnets extract disease biomarkers, like proteins or bits of DNA, that can be the telltale sign of an infection. To diagnose malaria, for instance, a blood sample is fed into a closed plastic tube filled with millions of tiny magnetic beads coated with nickel. Nickel chemically binds to a protein produced by the malaria parasite, called histidine-rich protein 2. Once the protein attaches to the beads, another larger magnet slides along the outside of the tube, dragging the combo through a series of chambers. One chamber washes contaminants from the beads; another contains a salt that binds to nickel, causing the biomarker to detach. Then researchers put the purified sample onto a cheap, rapid diagnostic chip. The chip detects the telltale protein, signaling a positive result for malaria.

Haselton plans to identify other pathogens by coating the beads with substances that bind to other biomarkers. Silica, for instance, picks up bits of DNA that can be used to diagnose tuberculosis. The tool could also provide an inexpensive way to test drinking water.