A diabetic woman's deep voice, furry arms and bald spot point to a hormonal imbalance, but a deeper look reveals an even hairier problem. 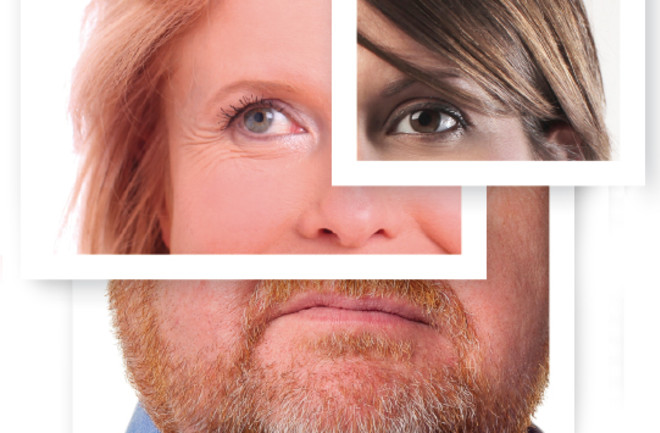 When I met Judy, I had just finished seeing what seemed like 100 diabetic patients, one after the other. As an endocrinologist, I specialize in the management of hormonal disorders, and this is business as usual for me: More than 60 percent of my patient visits focus on diabetes.

I picked up my last chart of the morning and saw that it was another new patient with Type 2 diabetes. Judy was 47 years old, and as a result of her illness, she already had suffered several heart attacks and developed eye and kidney damage. She also had blockages in the major arteries that supply her legs with blood, and she had dangerously high blood pressure. I flipped through Judy’s chart, noting no other unusual medical problems. Although she clearly had severely uncontrolled diabetes, the case seemed pretty routine.

Then I entered the room — and saw something far from ordinary. Judy had a beard. My morning of nonstop diabetes just got a lot more interesting.

Judy was obese and looked for all the world like a man who hadn’t shaved in two weeks. Her facial features were coarse, and she had a receding hairline and a big bald spot. Her hands were large and appeared masculine. Thick hair covered her arms. When she greeted me with a cheerful “Hello,” her voice was low and gravelly.

I panicked. Was this “she” actually a “he?” Did I incorrectly assume Judy was female based on her name? Did I miss a gender reassignment surgery in her medical history? Was she transgendered, and I missed that as well? How could I, a specialist in hormones, enter an exam room ignorant of my patient’s gender?

“So, Judy, what brings you here today?” I said as I scanned her chart again, covertly searching for anything I might have overlooked.

“I’m here to talk about my diabetes,” she replied.

“Your diabetes? Not … anything else?” If Judy truly were female, she definitely had other endocrine issues to discuss that might be slightly more urgent than her diabetes.

I needed to confirm her gender in a way that wouldn’t be insulting. I launched into a modified version of the usual questions I ask diabetic patients, bumping the ones I typically ask women closer to the top of the list.

I asked about what complications of diabetes Judy had, and when I felt we had built up a decent rapport, I asked about her menstrual periods. Preparing for a potentially awkward moment (Periods? What? Don’t you know I’m a man? What kind of doctor are you?) I held my breath.

She immediately replied, “Oh, I haven’t had any in over 10 years. They just stopped, for no apparent reason.”

Diabetes Takes a Back Seat

Yes! Female! And with that, a routine diabetic appointment took a detour into the unknown. For the first and probably the last time in my professional life, I found myself telling a patient, “OK, I really don’t care about your diabetes right now.” I then asked Judy about her physical appearance.

“I noticed that you have quite a bit of facial hair and that you’ve also lost some on your scalp,” I said. “Did this happen recently?”

Judy said it was more than a decade ago when she noticed the gradual onset of a beard, which she needed to shave more and more frequently. She began losing scalp hair and developed acne. Her shoulders broadened, her voice deepened and her facial features became coarser.

“Did you discuss this with your doctor?”

“I did. I saw several. They told me I had polycystic ovary syndrome.”

I saw that Judy’s chart listed possible PCOS, which is quite common in women with diabetes. PCOS also is the most common cause of masculine body hair in women and is caused by abnormally elevated testosterone production by the ovaries. Testosterone is the hormone produced by the testicles that results in masculine body features such as deepening of the voice, increased muscle mass and coarse facial and body hair.

Based on the extreme nature of Judy’s symptoms, I knew she did not have PCOS.

“Have you ever taken any anabolic steroids? Like those they test for in the Olympics?”

“Did they ever do any other tests on you, to look for other causes?”

“No. Over time, I just got used to looking like this, and we never really discussed it again. I just figured this was the way I was going to look from now on.” For years she had been taking metformin, a drug that is used to treat both Type 2 diabetes and PCOS, but based on her physical appearance and absence of menstruation, it clearly had not been working — if the diagnosis actually had been correct.

After I saw her results, I recommended that Judy have an ultrasound of her pelvis to look for a tumor that was producing high amounts of testosterone, since the ovary is the most common location where these tumors are diagnosed. The ultrasound report delivered another surprise: No ovaries seen.

Was I wrong? Had I been fooled?

I knew Judy had to have a tumor — and since we established that she was female, she had to have ovaries, too — so I thought about the result more carefully. During an ultrasound, sound waves are emitted from a probe placed on the skin, penetrating the body, and are reflected back to a receiver, where they are recorded in picture format.

But then I remembered that ultrasound images aren’t always clear for obese patients; sound waves must travel a longer distance, so the reflected pictures tend to be fuzzy. I was certain Judy’s body size was affecting the view of her ovaries.

I requested a CT scan, which is a more detailed X-ray of the body, of her abdomen and pelvis. This time, the culprit appeared — a 2.3-inch mass on Judy’s right ovary.

Because hormone-producing tumors are rarely malignant, no biopsy was necessary. After Judy’s cardiologist confirmed the procedure would be safe, her ovary was removed, along with the tumor, several months later. It was classified as a steroid-secreting tumor of the ovary, which occurs in less than 1 percent of all solid ovarian masses.

Two weeks after Judy’s surgery, her testosterone levels returned to normal. When she next visited my office, her facial features had softened, and her scalp hair had started to grow back.

I asked Judy how she felt, now that her testosterone levels were back in the normal range.

“I feel less moody … I definitely feel better. I guess it’s not just female hormones that cause mood swings!”

[This article originally appeared in print as "Gender Bender."]