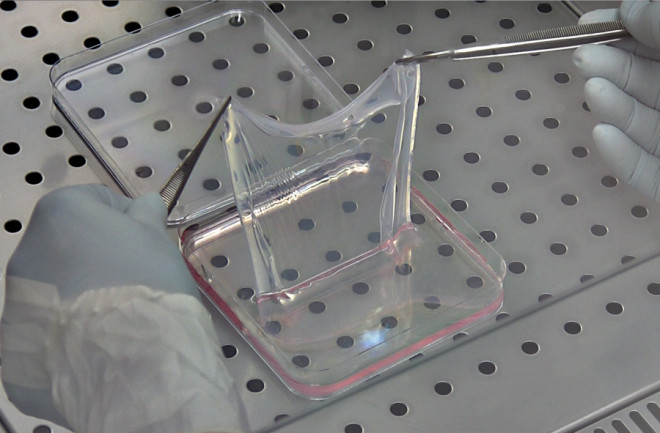 An epidermal sheet grown on a fibrin base, like the grafts used to heal a boy's skin in Germany. (Credit: CMR Unimore) Doctors have replaced the majority of a patient's damaged skin using genetically-modified grafts. In 2015, a seven-year-old boy was admitted to a German hospital with lesions and blisters across nearly his entire body. He suffered from a rare genetic condition called junctional epidermolysis bullosa (JEB) that prevents the epidermis, the outermost layer of our skin, from properly attaching to the underlying base. It results in extremely fragile skin prone to breaking and tearing, and patients with such severe cases often don't survive beyond adolescence. The culprit is a deficiency of the protein laminin-33, and it's caused by a mutation in one of three genes.

Faced with slim odds for their patient's survival, the German doctors obtained permission from the boy's parents to attempt a gene therapy technique that had only been applied on a small scale before. It involved taking an unaffected section of his skin and using a retrovirus to implant the correct DNA sequence in the skin cells. Once the fix was in place, the cells were cultured to grow larger patches of new skin, which were then attached to sheets of the protein fibrin and grafted onto the boy's body. This was the first time such an operation had been attempted on a large scale, and it raised questions as to whether the patient's body would accept the modified graft, and if the transplanted skin would continue to function properly. That was two years ago, and today the boy is going to school, playing soccer and generally living the life of a normal child, the researchers say. "For the first time, outside the [blood-producing] system, it was able to show that transgenic stem cells can permanently regenerate an entire tissue," says Michele de Luca, of the Center for Regenerative Medicine University of Modena and Reggio Emilia and a co-author of the paper. "All the clinical, biological and molecular parameters are fine, his epidermis is stable, robust, doesn't blister at all and its functionality is quite good," he says. De Luca performed the retroviral insertion of healthy DNA and grew the skin grafts in his lab, before transferring them to doctors from the Burn Centre at the Ruhr University's hospital in Bochum. The skin grafts stand up to physical stress, and function in every way like skin should, without the need for ointments or other treatments, the researchers say in research published Wednesday in Nature. This matches up with the experience of burn victims who receive skin grafts, according to de Luca. "If we think about the experience we have in the burns, I would say that this epidermis would stay basically forever," he says. Some of those patients have been observed for 30 years or more, with no major issues. Although the addition of a modified DNA sequence was unique, the operation was functionally quite similar to those that burn patients undergo.

The health and longevity of the skin comes from the presence of certain long-lived stem cells in the epidermis. Though they are few in number, the stem cells continue to replicate and produce new cells that become part of the skin's upper layer. Their presence is crucial for the skin to function properly, and tests of the boy's grafts indicate that healthy populations of these stem cells had indeed taken hold, and that the repair gene the researchers added was still active. "Once you have regenerated the epidermis in the body with stem cells, they behave like they are supposed to be. So they adjust their number and they keep making the renewal of the epidermis as a normal physiological situation," de Luca says. Observing these stem cells at work also helped clear up a mystery about how the skin functions. Researchers previously didn't know if all cells with the capacity to produce new cells, which includes stem cells as well as others, produced new skin cells equally, or if a smaller population of stem cells was responsible. With the researchers new insights it's clear that the latter hypothesis is correct. The operation's success offers hope to people worldwide who suffer from JEB, and the many others who experience similar skin conditions. Though the results are promising, some similar conditions could require more complicated genetic engineering, and the procedure may be more difficult in adults, who have more total skin area, and whose stem cells don't replenish themselves as readily. The researchers also plan to continue monitoring their patient to ensure that problems don't arise further down the road. In any case, the work is heartening both for the near total success of the technique in this case and for the affirmation that genetically engineered cells can integrate well with our own tissues even at large scales.