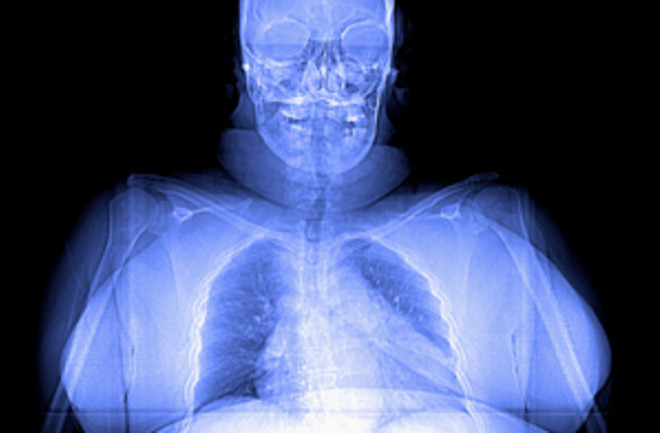 X-ray shows effects of obesity, which now afflicts more thatn a quarter of Americans, according to the CDC. | Photo Researchers

The rate of obesity in American adults was supposed to have fallen to 15 percent or less by now. But not one state has achieved this goal, set forth a decade ago by the Department of Health and Human Services in its report “Healthy People 2010(pdf).” In August the Centers for Disease Control and Prevention (cdc) announced negative progress: The number of states reporting a 30 percent obesity rate has jumped from zero to nine.

“Obesity rates in some states are still screaming up the curve,” says J. Michael Gaziano, a cardiologist at Brigham and Women’s Hospital in Boston, who dubbed our era the “Age of Obesity and Inactivity” in a January 2010 editorial in the Journal of the American Medical Association. Mississippi now has the highest rate of obesity in the country, with 34.4 percent of adults affected, according to the cdc. Other states topping 30 percent include Missouri, Kentucky, West Virginia, Tennessee, Arkansas, Oklahoma, Louisiana, and Alabama. Colorado had the lowest obesity rate in the nation, at 18.6 percent of adults—still above the target.

Fighting back against this grim trend, public-health officials have begun to embrace the sort of tough measures previously wielded against cigarette smoking. The most notable success last year came with the passage of a measure in the Patient Protection and Affordable Care Act of 2010 (pdf) requiring nearly all chain restaurants to include calorie counts on their menus.

On the research front, meanwhile, investigators are making some progress in grasping obesity’s causes. A provocative study published in Science in April 2010 suggests that a change in the bacterial population of the gut contributes to the risk of metabolic syndrome, which is characterized by elevated weight, blood pressure, blood sugar, and blood fat. Researchers led by Emory University pathologist Andrew Gewirtz found that mice genetically deficient in an immune system receptor have altered gut bacteria, eat more than normal mice do, and develop features of metabolic syndrome. However, Gewirtz says it is “unlikely that there will be a single causative bacterium for obesity as there is for ulcers.”

In fact, despite the surge in obesity, no progress was seen this year on approved medical treatments available to consumers struggling to lose weight. The Food and Drug Administration refused to approve two investigational appetite suppressants, Qnexa and lorcaserin, primarily out of safety concerns. Another weight-loss drug approved back in 1997, Meridia, was pulled from the market under pressure from the fda after studies showed it raises cardiovascular risk. And clearly, most current approaches to dieting are not effective: Up to 95 percent of people who lose weight eventually regain it.

“We have to find medications that help us keep the weight off after we’ve lost it,” says research pediatrician Michael Rosenbaum of Columbia University, who is studying the use of the fat-signaling hormone leptin for just that purpose. Whoever finds the drug that can cure the obesity epidemic will surely end up rich as well as thin.

More From Discover
Health
18 Best Creatine Supplements to Buy Right Now
Health
Is 'Expired' Milk Safe to Drink? Here's How to Know When to Throw Away Food
Health
10 Science-Backed Ways to Boost Your Brain
Health
Extreme Fatigue: 4 of the Longest-Lasting Sporting Events
Health
How Saliva Changes The Flavor Of Food
Health
Walking vs. Running Benefits: Should You Walk or Run for Exercise?
Recommendations From Our Store
My Science ShopDiscover STEM Kits
My Science ShopDiscover 2022 Calendar
My Science ShopStrange Science
My Science ShopElements Flashcards
Shop Now
Stay Curious
Join
Our List