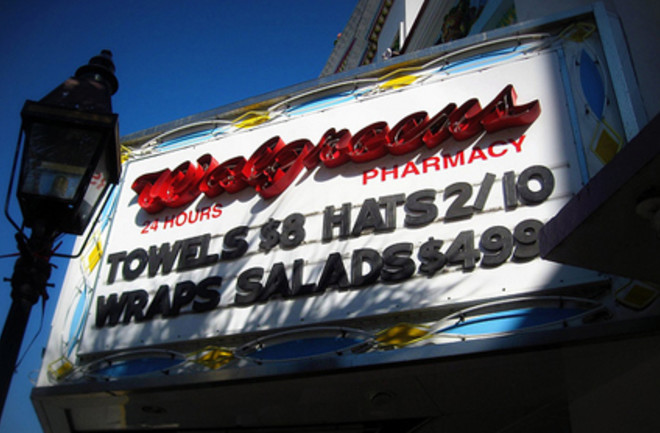 While you're down at the drug store picking up toothpaste and sleeping pills, why not have your DNA tested? Walgreens says that this month it will become the first drug store to offer personal genomics tests in its store. For the low, low price of $20-30 you can pick up a kit to take a sample of your own saliva, which you mail off to Pathway Genomics, a company partnering with Walgreens.

Customers can then go Pathway's Web site and order tests. Pathway says the tests — for drug response, "pre-pregnancy planning" and "health conditions" — start at $79 and run up to $249 for all three [AP].

With the personal genomics trend continuing to accelerate, this was perhaps an inevitable development. But the fact that personal tests are going into drug stores doesn't mean that personal tests are as readily reliable or regulated as the rest of the tests and medications that fill the aisles. 1. The FDA is not pleased. The Pathway test has not been approved by the Federal Drug Administration. In a statement after announcing this deal, Walgreens washed their hands of responsibility in this regard, saying Pathway assured them that the product didn't require FDA approval. The FDA, however, does not agree.

In a statement, the FDA said it has regulatory authority over all lab-developed tests. "As new technologies become available and are marketed directly to consumers, FDA will consider all regulatory options," the agency said. "Consumers should understand that the claims made by a company with an unapproved test have limitations and that they should not be making important medical and lifestyle decisions without first consulting a health care professional" [Wall Street Journal].

The FDA isn't the only public body worried about these tests. Here in New York, where DISCOVER is located, we won't be able to run down to Walgreens and pick up a DNA test. The state considers these to be medical tests, and medical tests require a license. When personal genomics companies first began to spring up, New York State issued nearly 40 cease-and-desist orders

in 2007 and 2008. It's still going to take some time to sort out the legality of who can look into your genome. 2. Can you actually learn anything useful? Remember, only six years have passed since the human genome was fully sequenced. Incorporating personal genomics into medicine is moving fast, but it's still in the early stages.

In most cases, the current level of DNA scanning technology and science is unable to offer meaningful predictions about the risk that a person will get a disease. “It is a really wonderful form of recreation,” said Scott R. Diehl, a geneticist at the University of Medicine and Dentistry of New Jersey. But as for applying it to health care, he said, “It’s very premature” [The New York Times].

The tests by personal genomics companies like 23andMe and Pathway look at particular point mutations that scientists think to be associated with diseases like Alzheimer's or cystic fibrosis. Making clear predictions from a person's DNA, though, will require not only a further understanding of what genes are linked to what diseases, but also how those genes interact with environmental factors, lifestyle choices, and each other, as our reporter found out

in 2008 when having her DNA examined by several of the most prominent companies. All that knowledge won't come fast, or cheap.

That might take a few years and require sequencing a person’s entire genome, not just sampling selected bits, as the companies do now [The New York Times].

3. Overreaction—and mixed results As the FDA noted in its statement quoted above, customers must understand the limitations of these tests—and not act too drastically. As DISCOVER's own Kat McGowan wrote last year

, "Another worry is that people may overreact to their results. Someone who has an elevated risk of breast cancer, for example, might take a drastic step like getting a mastectomy, not realizing that the test predicts increased risk, not a particular outcome." Then again, if you get curious enough to try multiple tests, you might have the opposite problem. Some

who've tried out multiple personal genomics firms have received contradictory answers. 4. The fine print Even if you don't act on the information that a personal genetic test brings, it could impact you emotionally to learn about your ancestry or your family (say, if your father wasn't your genetic father). That's why the fine print on personal-genomics products is so extensive. And the ramifications could do beyond the emotional realm. The Genetic Information Nondiscrimination Act of 2008

offers some protection for personal genetic information, but how much is not terribly clear. Things are changing fast in the world of personal genomics, and it may be difficult or impossible to predict the significance, or even risk, of information you learn in 2010. As 23andMe's terms and conditions

Even if you share genetic information that has no or limited meaning today, that information could have greater meaning in the future as new discoveries are made. If you are asked by an insurance company whether you have learned genetic information about health conditions and you do not disclose this to them, this may be considered to be fraud.

5. Ready for the shelves? Still, though, why shouldn't you have the choice of whether to test your own genome? You get to test yourself in other health capacities:

Drug stores already carry a variety of diagnostic tests, like those for pregnancy, cholesterol and blood sugar. When some of these tests were introduced, there was controversy about whether consumers could test themselves.

Although broader in scope, Pathway’s test is not the first DNA-based analysis to be sold in drug stores. Sorenson Genomics began selling a paternity test through Rite Aid stores in late 2007. Sorenson has sold more than 100,000 tests through Rite Aid and other major pharmacy chains since then, according to Jacob Moon, a spokesman for the company [The New York Times].

But personal genomics is a different ballgame. Paternity tests and pregnancy tests bring you clear yes-or-no answers; they don't evaluate complicated, multifactorial questions like those that personal DNA tests try to answer. And that complexity may be more than consumers bargained for. Related Content: DISCOVER: How Much Can You Learn from a Home DNA Test?

DISCOVER: Your Genome, Now Available for a Relative Discount