Aging may begin in the mitochondria—the powerplants of the cells 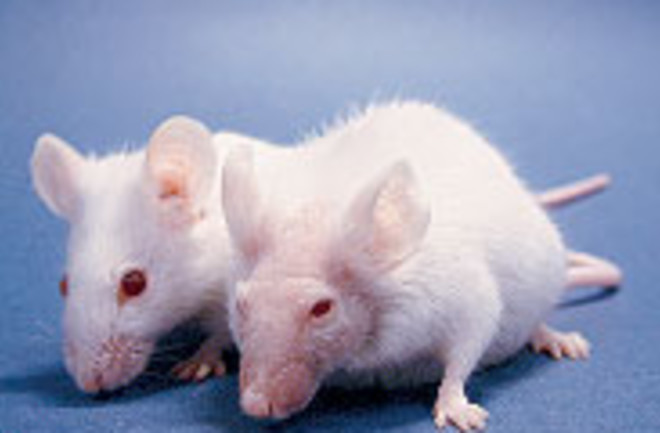 These two young mice were born on the same day. The one on the right carries a faulty enzyme. | Courtesy of Nils-Goran Larsson

Molecular biologists may be on the brink of unleashing a cellular fountain of youth. In May Nils-Goran Larsson of the Karolinska Institute in Sweden pinpointed where the process of aging begins in a cell—the mitochondria—and thus where it may be slowed.

Mitochondria are tiny organelles that harness energy and turn it into a usable form. They are also the only structures outside a cell’s nucleus that contain their own DNA, and that turns out to be important. While DNA in the nucleus has an extensive system of proofreading and repairing enzymes, mitochondria depend mostly on a single protein to patch up mutations. When Larsson engineered mice with a defective, error-prone version of the protein, mice accumulated mutations unchecked. The results were startling. At young adulthood, Larsson’s mice resembled those three times their age, with bone and muscle loss, heart disease—even baldness.

The study is the first hard evidence that these mutations are a cause of aging rather than just a sign, like wrinkles. When mitochondria begin to break down, they run less efficiently, creating more toxic free radicals. The process resembles an inefficient engine producing more smoke. Larsson’s research suggests that the damage from these free radicals—either to the mitochondria or other parts of a cell—is what triggers the aging process.

Mitochondrial mutations may also underlie Alzheimer’s, Parkinson’s, and other diseases that are common among senior citizens, says Doug Wallace, director of the University of California at Irvine’s new Center for Molecular and Mitochondrial Medicine and Genetics. “If we could find a way to protect mitochondrial DNA, either with drugs or by using gene therapy to transplant it to the nucleus, it could not only extend our life spans but prevent many of the diseases we associate with aging as well.”