32: These Parasites Really Get Under Your Skin 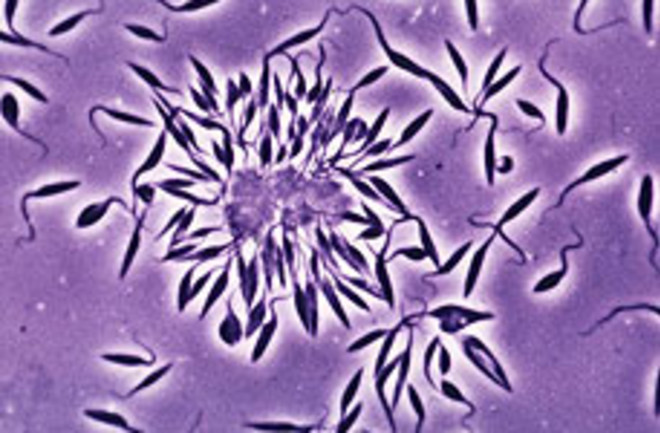 Stealthy Trypanosoma cruzi, the parasite responsible for Chagas disease, mixes its DNA with that of its victims. | Courtesy of WHO/TDR

It is scary enough when parasitic diseases such as malaria and amoebic dysentery get into the body, but molecular biologist Antonio Teixeira of the University of Brasilia has found something even more frightening. At least one parasite—Trypanosoma cruzi, which causes Chagas disease—can worm its way into your DNA, becoming a permanent, heritable part of your genes.

Though mostly eradicated in the United States, Chagas disease claims 100,000 lives a year in South America. Transmitted by the bites of reduviid bugs that flourish in tropical regions, the protozoan T. cruzi damages or destroys vital organs, especially the heart, over a period of years. Researchers still don’t fully understand how the intracellular parasite evades its hosts’ immune system for such a long time, or how it causes this damage.

On a hunch, Teixeira screened DNA from the hearts of 13 afflicted adults. Each sample showed sequences of the parasite’s genome in one region of a specific chromosome. Teixeira then infected chicken eggs with the parasite and examined both the resulting chickens and two generations of its offspring for T. cruzi

DNA. Sure enough, he found parasitic DNA in 25 percent of the chickens hatched from injected eggs and in all the offspring of the infected chickens.

The findings hint that the protozoa responsible for toxoplasmosis, amoebic dysentery, malaria, and other diseases may also insinuate themselves into human genes. If so, we probably all carry remnants of parasitic DNA passed along by infected ancestors. The big question then becomes, what is that parasitic DNA doing to us? “It isn’t proven yet that getting into the DNA is critical to causing Chagas or any other disease,” Teixeira says. “But I’d think it was odd it if it didn’t influence anything.”

More From Discover
Health
Hugging Is an Evolutionary Tool for Survival
Health
The Other Magic Mushroom: Why a Canadian Startup Is Suddenly Interested in the Fungus From Super Mario
Health
How To Avoid Food-Borne Illness
Recommendations From Our Store
My Science ShopCosmos: Possible Worlds
My Science ShopStrange Science
My Science ShopEinstein's Universe
My Science ShopElements Flashcards
Shop Now
Stay Curious
Join
Our List