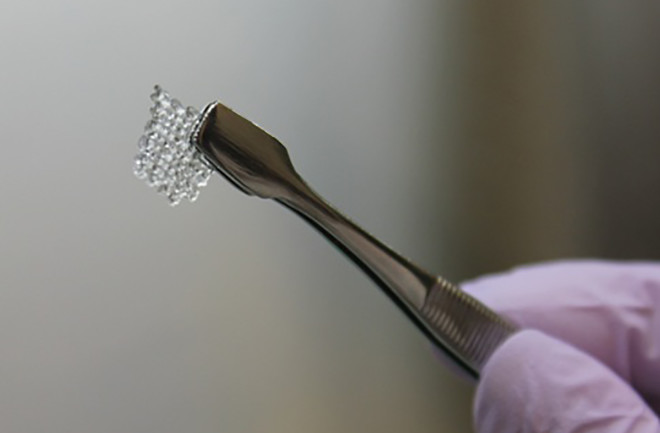 The scaffold for the 3-D printed mouse ovary. (Credit: Northwestern University) Mice with artificial, 3-D printed ovaries have successfully given birth to healthy offspring. It's another success for members of the same Northwestern University team that in March reproduced an entire menstrual cycle using organs-on-a-chip. This time, they've created ovaries from a type of gelatin hydrogel and infused them with immature egg cells before implanting them in female mice. The ovaries behaved like the natural ones, picking out an egg cell to mature and pass along, allowing the mice to bear healthy offspring. The procedure marks another step toward printing replacements for missing or damaged organs.

From Skeleton to Organ

To create their ovaries, the researchers, led by Theresa Woodruff, the director of the Women’s Health Research Institute at Northwestern's Feinberg School of Medicine, first learned to print the gelatin at exactly the right consistency. It had to be strong enough to handle surgical implantation while porous enough to hold on to egg cells and allow veins to grow. Through a series of trial and error experiments, the researchers discovered the best way to print the scaffolding from gelatin fibers that contained a series of tiny pockets to hold ovarian follicles.

“Every organ has a skeleton,” Woodruff said in a statement. “We learned what that ovary skeleton looked like and used it as model for the bioprosthetic ovary implant.”

A microscopic view of the gelatin structure used to 3-D print the bioprosthetic mouse ovary implant. (Credit: Northwestern University) In mammal ovaries, follicles release egg cells and secrete hormones that regulate the fertility cycle. The researchers seeded their gelatin ovaries with mouse follicles before implanting them into live mice, where they would hopefully go on to regularly mature and release eggs, along with the hormones necessary to sustain a pregnancy. They then let them sit for four days so the follicles could establish a connection to each other before surgically implanting them in mice with their ovaries removed. A week later, veins had grown throughout the artificial ovaries and they began seeing signs of native mouse cells moving in. They also found signs of several hormones emitted by the follicles as they begin to ready eggs for release, indicating that the menstrual cycle was proceeding as they had hoped.

The true test of the ovaries was to give new life. By this measure, they appear to have been up to the task. Of the seven mice that received 3-D printed ovaries, three birthed litters, and those mice went on to have children of their own. The mothers were also able to lactate, a process controlled by progesterone emitted by glands in the ovaries. They published their findings

Tuesday in Nature Communications. Although this technique could conceivably be applied in humans, trials are still distant. Human 3-D printed ovaries bring additional challenges as well, because human ovarian follicles are bigger and grow more rapidly, meaning that they could become too large for the restrictive gelatin pores they reside in. https://www.youtube.com/watch?v=_5whpjlPO6Q&feature=youtu.be The results are nevertheless encouraging, both because they hint at the development of other 3-D printed organs and because they represent another encouraging development for women whose ovaries have been damaged or removed. Some cancer treatments can render women infertile, and Woodruff's lab has been searching for a way to give these women another shot at pregnancy. They've previously experimented with removing and freezing ovaries

, and this concept could represent another way to solve the problem. Actually producing other organs using a similar technique may be even further off, though. Each organ represents its own challenge, and some contain more types of tissue working in concert than ovaries do. Still, as 3-D printing technology becomes more sophisticated and research progresses, it could one day be an option.