20 Things You Didn't Know About Bacteria

The oldest lifeforms on the planet still have a few secrets. 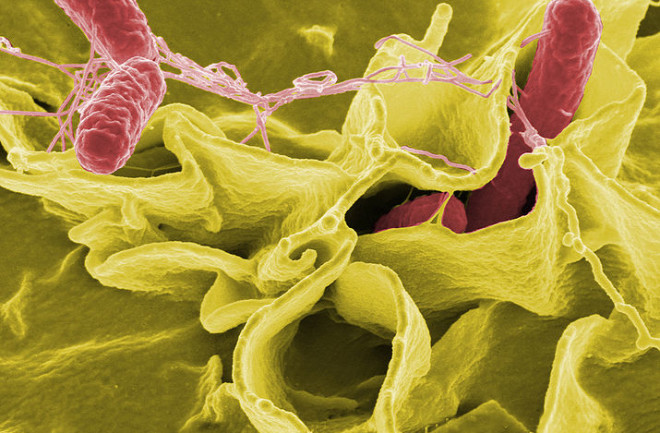 2. Lined up end to end, they would stretch some 10 billion light-years — literally from here to the edge of the visible universe.

3. And there are always more on the way. Pseudomonas natriegens, an ocean-dwelling bacterium, can go from birth to reproduction in 10 minutes flat. In five hours a single cell could theoretically give rise to more than 1 billion offspring.

4. Bacteria have been around for at least 3.5 billion years, making them the oldest known life-form on the planet.

5. Humans didn’t catch a glimpse of them, though, until 1674, when Dutch scientist Antonie van Leeuwenhoek spotted tiny swimming “animacules” while fiddling with the newly invented microscope.

6. A compelling argument for brushing: He discovered them while examining pond water and scrapings from the human mouth.

7. Most bacteria have yet to be identified. In 2003 geneticist J. Craig Venter began trolling the high seas and analyzing the water. On his first trip he fished out more than a million never-before-seen bacterial genes.

8. The first artificial life-form will be not a robot but a bacterium. Not content with finding natural bacteria, Venter is leading an effort to build a bacterium from scratch.

9. No escaping them: Your body has 10 times more bacterial cells than human cells.

10. Can’t catch them, either. Whipping their tails, E. coli can travel 25 times their own length in 1 second, equivalent to a horse running 135 miles per hour.

11. Bacteria have even set up permanent camp inside our cells. Mitochondria, the power­houses that supply energy to nearly every cell in the body, are the descendants of bacteria that were engulfed by larger microorganisms billions of years ago.

12. When you pop a pill to kill off a bad bug, you kill some of the good guys, too. A bacterium called Clostridium difficile can move into the prime intestinal real estate cleared out by antibiotics, causing painful inflammation and diarrhea.

13. Bacteria are adept at developing resistance to antibiotics. Among the deadliest of resistant bacteria is MRSA, which killed 19,000 Americans in 2005 alone.

14. MRSA’s deadliness comes in part from a class of chemicals known as carotenoids, which MRSA uses to fight off our immune systems. Ironically, carotenoids are found in many healthy fruits and vegetables and may reduce cancer risk.

15. But most bacteria are harmless, and some are even helpful in aiding our digestion. Mice with bacteria-free intestines need to eat 41 percent more calories than their germy counterparts.

16. Floating bacteria are extremely effective at spurring condensation, leading to snow and rain. Some scientists propose spraying bacteria into the clouds to end droughts.

17. Certain bacteria thrive in extreme conditions. In 2006 a probe at a South African gold mine turned up bacteria living nearly two miles underground, subsisting on the energy given off by radioactive rocks.

18. Another species, Deinococcus radiodurans, can survive almost 10,000 times the dose of radiation lethal to humans, making it a prime candidate for the cleanup of nuclear waste.

20. But can they run Windows? By programming instructions into their genes, scientists have engineered E. coli that act like computers, assembling into glowing bull’s-eye shapes on command.