Zombies: Ethics of the Undead!

Halloween is a-comin' and this Sunday brings us AMC's The Walking Dead. In honor of that, we're discussing The Ethics of the Undead here at Science, Not Fiction. This is part I of IV.

Zombies are everywhere! Zombieland, Shawn of the Dead, and 28 Days Later in the movies; World War Z and Pride and Prejudice and Zombies on the bookshelf; Left 4 Dead, Dead Rising and Resident Evil in your video games - not to mention the George A. Romero and Sam Rami classics in your DVD collection. And this Sunday Robert Kirkman’s epic The Walking Dead lurches from the pages of comic books onto your television thanks to AMC.

Where ever you turn, zombies are there. We can't seem to get enough of the re-animated recently departed. But why do we love these ambling carnivorous cadavers so?

Zombies are horrifying. An outbreak would almost certainly lead to global apocalypse. Unrelenting, unthinking, uncaring, undead, they are a nightmare incarnate. They remind us of mortality, of decay, of our own fragility. Perhaps worst, they remind us of how inhuman a human being can become. 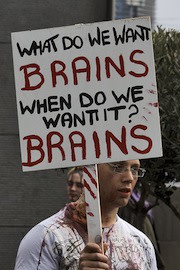 Zombies are familiar. Refrains of “Brains!”, guttural groans, and mindless shambling instantly trigger the idea of a zombie in our mind. We all know, somehow, that decapitation - that is, destruction of the zombie brain - is our only salvation. I bet you've dressed as one for Halloween. Every time “Thriller” comes on you probably dance like a zombie. Some mornings I feel like a zombie. Even philosophers talk about zombies. We know zombies. They are hilarious, they are frightening, they are part of us. And that is why we love them.

But have you ever asked yourself: is a zombie still a human? is a zombie dead, really? can it feel pain? does a zombie have dignity? Has the question ever popped up in your quite-live brain: is it ok to kill a zombie? Could a zombie be cured? If you could cure it, would you still want to? In honor of Halloween and our culture’s current love affair with brain-eating corpses, I present The Ethics of the Undead, your universal guide for answering all of your most pressing zombie questions. Stay tuned for posts throughout Halloween weekend!