Zombies: Can You Kill the Undead? 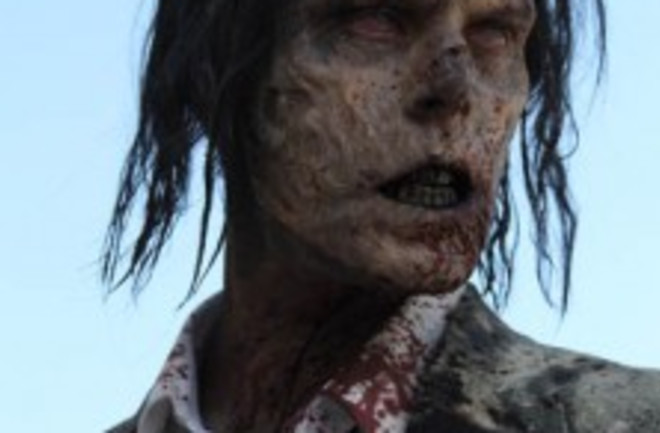 The second you turn to look at whatever he sees, boom! Straight for the neck.

Halloween is a-comin’ and this Sunday brings us AMC’s The Walking Dead. In honor of that, we’re discussing The Ethics of the Undead here at Science, Not Fiction. This is part III of IV. (Check out parts I, & II)

Are zombies really dead? How do we know? People are often reported “clinically dead” only to be revived later. If it is moving, if it reacts to stimuli like a food source or sounds, and if metabolic processes are in play, how can we call a zombie dead?

The most basic definition of life is the ability to have “signaling and self-sustaining processes” as the all-knowing Wikipedia tells us:

Living organisms undergo metabolism, maintain homeostasis, possess a capacity to grow, respond to stimuli, reproduce and, through natural selection, adapt to their environment in successive generations.

Zombies do indeed undergo a qualified form of metabolism, sort of maintain homeostasis, and definitely respond to stimuli. Alternately, zombies do not grow, reproduce, or go through natural selection. So much for a clear answer there.

Consider the following: When we “kill” something, we are implying that our action has made an “alive” thing “dead.” We commonly refer to “killing” zombies. Therefore, a zombie is alive until it is killed. Not quite, some might argue, a zombie is undead. Undead is a special word that describes an entity which was once alive in the full meaning of that word, then died, and was then re-animated (e.g. a zombie). The zombie was not re-vivified, that is, brought back to life, but its bare biological systems were re-started.

At the other end of the spectrum, how about a person who has a heart attack and, due to a delay in resuscitation, temporarily experiences cardio-pulmonary-death and brain-death: a total cessation in life functions. The person is, for a moment, clinically dead. That person is then successfully revived. The heart and lungs begin functioning again and the re-oxygenated brain “comes back to life” with no harm done. This person who is “back from the grave” is revivified. Though their biological functions ceased, for a variety of reasons the destructive postmortem processes were delayed long enough to allow total system restoration.

A zombie isn’t a shocked frog leg nor is it a revived person. Instead, we want to understand whether or not a moving, metabolizing, stimulus-responding corpse is alive. I submit that various parts of a zombie may resemble life, but in reality, it has less “life” than the bacterium eating its eyeball. It is more accurate to say that the pathogen inside the zombie is alive, while the corpse itself is dead. The corpse, as noted in my description of a zombie, is in a constant state of decomposition. While decomposition may be slowed by the pathogen, the process is not stopped.

Most important to the entire discussion, however, is brain activity. Though the body and some parts of the brain stem are reactivated, a zombie is, quite literally, brain-dead. Beating-heart cadavers are a primary example of a “functioning” body preserved by external means. In a zombie, organs function independently to a minimal degree and reflexes (such as balance) exist to some extent. Thus, while the zombie pathogen would do more than our current medical technology can do for a beating-heart cadaver, it neither reverses brain-death nor does it properly maintain basic conditions of life like metabolic processes or homeostasis. Some specific stimulus response systems are re-animated, but this is an illusion of bodily life, not an actual case of life.

Thus, a zombie is a dead body that affects some life-like behavior because it is being controlled by a living pathogen. “Killing” a zombie is, in effect, destroying it in a sufficient way to prevent the pathogen from utilizing the corpse.