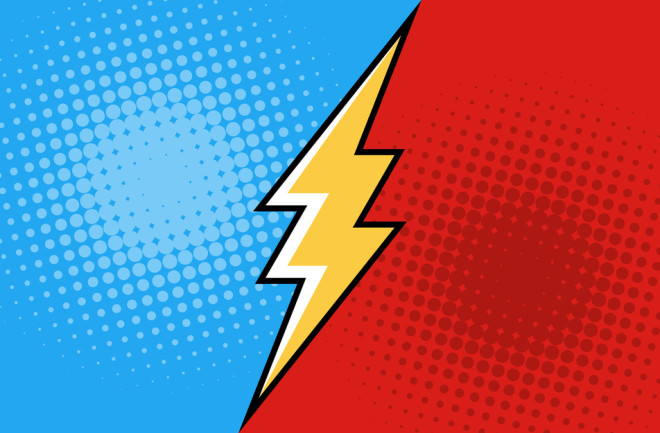 If you draw lightning bolts like this, you’re doing it all wrong. (Credit: Shutterstock) How do you draw lightning bolts? If you draw them as zigzags, similar to the image above, and Harry Potter's famous scar, then you're wrong. A 19th century photographer named William Nicholson Jennings had this wild theory that lightning isn't depicted accurately in paintings. But how to prove it? Technology, of course! Jennings looked to photography to prove his theory correct, taking the first-ever photo of lightning on September 2, 1882. At first, he didn't succeed because his plate camera's exposure wasn't suited for such quick bursts of light. That made it tough to get a crisp image of an evanescent bolt. He was eventually able to work the technical issues out, though and took enough photos to determine that lightning doesn't resemble actually awkward zigzags as painters have for centuries suggested. Now, a study, inspired by Jennings' work, released Tuesday in The Royal Society builds on his findings. A team of scientists compared paintings of lightning bolts to photos of real lightning and also looked into why these variations exist.

First, the scientists compared lightning bolts in 100 paintings, most from 1500 to 2015, and 400 photographs from amateur atmospheric optical photographers. When it comes to paintings, no more than 11 forks were shown, while up to 51 appeared in photographs of the real deal. And the same goes for the number of times the lightning is shown to split, or branch — on average, real lightning has 8.4 branches compared to the 2.2 branches shown in paintings. Next, the researchers conducted psychophysical experiments, hoping to understand why these differences occur. Ten people were flashed photos of real lightnings and asked about the number of branches they saw. If there were less than 11 branches, the participants' guesses were fairly accurate. Any more than that, though, and the number of branches was “strongly underestimated.” Our eyes and brains just aren't fast enough to catch lightning in a bottle. These findings could explain why artists' depictions of lightning are lacking in the zigzag department. Since 2000, though, paintings have included more branches, something that's likely due to digital cameras. Before photography, people had to rely solely on eyesight and memories to help showcase lightning strikes, which is difficult when the average strike lasts 1 second or less. A reliance on ancient Greek depictions of lightning — which usually show the stereotypical zigzag shape — could be partly to blame as well.