Young Earth May Have Had Tectonic Plates, Not Hellish Magma Oceans 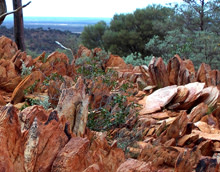 Tiny crystals found in an Australian rock formation may be the key to understanding what earth looked like in its very earliest days, researchers say; a new study of 4-billion-year-old crystals seems to indicate that our planet already had plate tectonics, and may have looked much like it does today.

Little is known about the so-called Hadean or the 'hell-like' period of Earth's history, which spans the time from Earth's formation 4.6 billion years ago until about 3.8 billion years ago. The best geological clues of this era come from hard minerals called zircons, which have survived weathering and can be found within younger rocks [Nature News].

An analysis of the Australian rocks

showed that minerals trapped within the zircon crystals had formed at a lower temperature and higher pressure than expected for crust of that age.... This suggests that the crystals had been formed in a subduction zone, where one rocky tectonic plate plunges beneath another, showing that plate tectonics was up and running at this time [New Scientist].

Researchers theorized that the minerals formed at lower temperatures because they were saturated in water, a finding inconsistent with earlier images of the earth as covered in boiling seas of magma; subduction zones are cooler than other deeply buried rock formations because they're chilled by ocean water. The study, published in Nature [subscription required], is of great interest to geologists, because it suggests that the processes that made earth a habitable place began soon after the planet's formation.

The early earth, however, is starting to shape up in the imagination as a relatively pleasant environment, although it was barren of life and considerably hotter than humans could tolerate.

"We're revealing a new picture of what the early Earth might have looked like," said lead author Michelle Hopkins.... "In high school, we are taught to see the Earth as a red, hellish, molten-lava Earth. Now we're seeing a new picture, more like today, with continents, water, blue sky, blue ocean, much earlier than we thought" [Astrobiology Magazine].