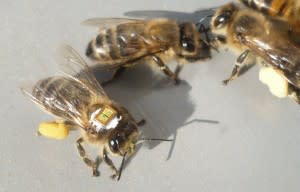 for lack of a more specific name---has generated a long list of suspects that includes mites, viruses, malnutrition, and even cell phone radiation. Two new studies published in Science suggest that neonicotinoids

, a class of widely used insecticides, may belong at the top of the list. That an insecticide kills insects like bees is not particularly surprising. Neonicotoinoids have already been partially banned in Italy, Germany, and France for their possible role in colony collapse disorder. Still, it remains one of the most common pesticides: one neonicotoinid alone, imidacloprid, is authorized for use on over 140 crops in 120 countries. Results from the two new studies suggest that even doses that do not kill the bee immediately can have enough ill effect to eventually cause colony collapse. The first study in the UK

compared 75 bumble bee colonies that researchers had exposed to varying levels of neonicotoinoids over 14 days. (Colony collapse disorder refers specifically to honey bees, but bumble bee numbers have been dropping off too

.) After six weeks of foraging in the field, the colonies exposed to low and high levels of insecticide were 8% and 12% smaller, respectively, than controls. They also produced on average only one or two queens compared to nearly 14 in unexposed colonies. Since bumble bees die off every winter and only the queen survives to found a new colony in the spring, it's easy to see how this could spell bad news for bumble bee populations. A second team in France

in Discover, tracked the movements of individual honey bees. They were tagged with RFID

chips (tiny chips---see picture above) that alerted researchers each time a bee got back to the hive safely. When the researchers released these bees out randomly in the wild, only 56.8% of exposed bees made it back compared to 83.1% of unexposed ones---a difference that is enough to tip colonies to collapse, according to population models. The exposed bees may have been too disoriented to navigate, as neonicotoinoids kill by messing with receptors in the brains of insects. Results from these two studies point toward a role of neonicotoinoids in colony collapse, though ultimately, there are probably multiple interconnected reasons. For example, previous research has found that neonicotoinoids also make bees more susceptible to fungal pathogens

. Despite the work of pesticide companies trying to find alternative explanations

, it's looking increasingly likely that their chemicals have some role in killing bees. Image: Science / AAAS