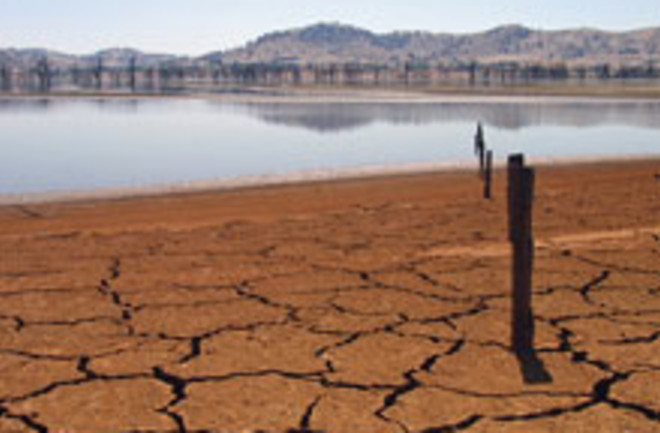 An agricultural region that produces over 40 percent of Australia's fruit, vegetables, and grain is seriously threatened by the country's ongoing drought, which has been developing into a crisis over the last decade. Scientists say that the two mighty rivers that irrigate the Murray-Darling Basin (an area the size of France and Germany combined) received the lowest amount of replenishing autumn rain since record-keeping began over a century ago.

Neil Plummer, acting head of the National Climate Centre, described rainfall during the southern hemisphere autumn as "an absolute shocker", and said: "I'm gasping for good news". Wendy Craik, chief executive of the Murray-Darling Basin Commission, said the river system's condition was "critical... tending towards flatlining". She added: "We have got it on life support" [The Independent].

The degrading ecosystem may cause strife between farmers and environmentalists, as the government has said it

might be forced to compulsorily acquire water from irrigators, a move that would anger and devastate farm families [The Daily Telegraph]. Conservationists say the mandatory water buy-backs are necessary to protect the wetland habitat of native birds, turtles and fish.

"more like a disaster novel than a scientific report" [Telegraph].

The Federal Government's climate change adviser, Ross Garnaut, has also painted a gloomy future for the Murray-Darling unless global warming is addressed. He predicts that by the end of the century the basin will have collapsed as a food-producing region and people will be moving away unless action is taken [Sydney Morning Herald].