World's Tallest, Pinkest Towers to Be Built in China 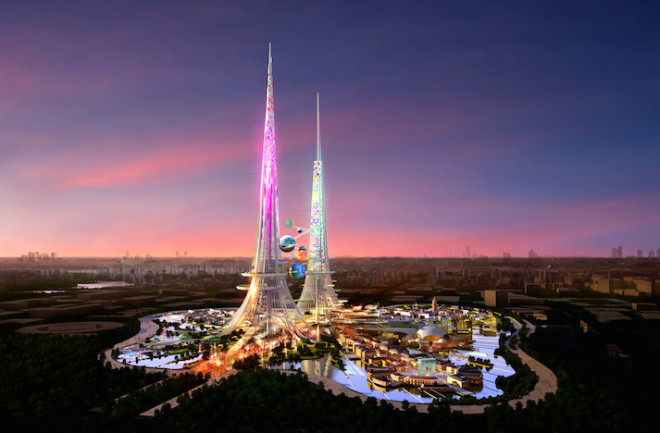 The Phoenix towers as seen in a conceptual illustration. (Courtesy: Chetwoods) When it comes to architectural superlatives China is already home to the world’s largest building, biggest dam and longest sea bridge, to name a few. But soon, the Middle Kingdom plans to also be home to the world’s tallest, greenest — and pinkest — structure. The British architectural studio Chetwoods recently unveiled its proposal to build a pair of pollution-scrubbing towers atop a lake in the Chinese city of Wuhan. The project, dubbed the Phoenix towers, will serve as massive beacons of China’s government-led focus on sustainability, and hopefully rake in big bucks from tourism. Both towers will be packed with environmentally friendly technologies on a grand scale, and the taller of the two buildings will rise 450 feet above the world’s highest structure, the Burj Khalifa. The towers look like giant pink structures that were pulled straight out of the computer game Sim City 3000. "In China if you come up with a slightly mad idea, its almost not mad enough," studio founder Laurie Chetwood told

Packed to the Gills

The towers' design pays homage to the mythological Chinese phoenix, which is often represented by birds that can be male, “Feng,” and female, “Huang.” The upper half of the Feng tower will house a solar-heated thermal chimney that will draw in and clean the city’s air while generating electricity. The tower will feed its excess electricity, air and water to the smaller Huang tower, which will feature a 100-story vertical garden, insect hotels(structures that provide safe places for bugs to nest and take refuge) and biomass boilers. The towers will also generate electricity from photovolactic cladding and hydrogen fuel cells. Spherical restaurants will be suspended between the two structures, and bars, galleries and other leisure attractions will be located within the smaller tower. The whole project will essentially create a buttressed island spanning the entire lake.

The sustainable features of the Phoenix towers project. (Courtesy: Chetwoods) But why the bold color scheme? Designers say the pinkish hues are meant to mimic the breathtaking sunsets famous in that region of China.

The towers themselves are meant to serve as monumental tourist attractions, rather than as apartments or offices. Commercial squares, capitalizing on the expected influx of visitors, are planned at the base of the pinkish landmarks. “You'll have a French street, a Japanese street, a Turkish street and so forth … to allow people to see the world without necessarily having to leave China," Chetwood told the Guardian. The project will cost roughly $1.2 billion, and planners hope to move from the design stage to construction within three years.