Whither the biggest iceberg in recorded history?

If an iceberg breaks loose from Antarctica and nobody's there to hear it, does it make any sound? That koan is more than just a meditative exercise for Doug MacAyeal, a glaciologist at the University of Chicago who has spent decades pondering the vast Antarctic ice sheets and the huge bergs they spawn. Neither he nor anyone else has ever witnessed firsthand the calving of an Antarctic berg, and the process still mystifies polar experts.

That's because Antarctic icebergs are a world apart from their craggy Arctic kin. While the latter break off in spikes and spires from narrow glacial tongues, Antarctic bergs are flat slabs rent from shelves of fossil snow that stretch hundreds of miles over the coldest water on Earth. They can be thousands of times bigger than boreal bergs, closer to the size of a small state than a large ocean liner. The most enormous Antarctic bergs are rare and elusive, embarking only once every few decades in untraveled seas and rarely straying far from the frozen continent. 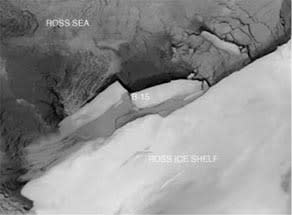 The super-berg B-15 — 183 miles long and 23 miles wide — broke off the Ross Ice Shelf Last March. By May, it had broken into two parts and drifted about 20 miles from shore.Image by Antarctic Meterology Research Center

So there was much rejoicing among MacAyeal and his associates in March when satellites spotted the largest berg in recorded history separating from the northern edge of the Ross Ice Shelf. The new arrival, dubbed B-15, is the size of Connecticut above water and 10 times bigger below. Melted, it would fill about half of Lake Michigan's basin with 250 trillion gallons of water. MacAyeal was especially jubilant, because he and his collaborators had predicted the parturition of the Ross Sea super-berg years in advance. Just a few days before its calving, he had even reminded a colleague at the National Science Foundation that shipping lanes to the United States' McMurdo Station could be blocked if the giant raft of ice happened to wander westward.

"I knew that berg would be born someday," says MacAyeal. "I had my hand on the kicking stomach of the Antarctic ice sheet."

But even the most doting iceberg obstetrician can't tell exactly when a piece of ice will set out to sea, or where it will go once it has embarked. MacAyeal's prediction is a case in point. In the mid-1980s, working with oceanographer Stan Jacobs at Columbia University's Lamont-Doherty Earth Observatory, he'd compared descriptions of the Ross ice front dating back as far as 1841, when British explorer Sir James Clark Ross first described the "great ice sea barrier." MacAyeal and Jacobs found that the front waxed and waned in cycles. It advanced into the ocean for about 50 years, then dropped back abruptly by about 20 miles before advancing seaward again. They reasoned that the ice-front retreats were the result of massive icebergs breaking off the end of the shelf. In satellite images, MacAyeal could detect cracks in the ice sheet parallel to the front and spaced about 20 miles apart. Icebergs seemed to be breaking off at the cracks, like sections of a chocolate bar, as the ice sheet flowed slowly but surely toward the Ross Sea.

Only one or two major bergs had calved from the Ross ice front during its latest 50-year advance. So MacAyeal suspected that the shelf was due for another big break. He knew a 20-mile-wide iceberg was in the works, but he couldn't say when it would split. And there was no telling how long it would be from end to end. "It could have been the whole length of the ice front," which stretches more than 300 miles from Victoria Land to Cape Colbeck, MacAyeal says. "We could have had a 300-mile-long iceberg that was 20 miles wide. Unfortunately, only about half of the ice front came off. The other side may come off any day."

When or how the second half of the Ross ice front will break off is also an open question. There are plenty of cracks on the shelf that never amount to anything, says Jacobs. So the science of iceberg tracking is still as much description as prediction. The National Ice Center in Suitland, Maryland, charts the position of all Antarctic bergs measuring more than 10 nautical miles in length [11.5 statute miles]. The icebergs are monitored by polar-orbiting satellites using microwaves, infrared light, and radar, and they're named according to the place and order in which they originate. B-15, for example, is the fifteenth big berg to break off the B quadrant of Antarctica since the center started counting in the 1970s.

The monitoring isn't systematic: It's a by-product of weekly reviews of images from meteorological satellites. Thus the station manager at McMurdo, concerned about his own weather, spied the satellite image of B-15 a couple of days before the ice center did. He e-mailed the snapshot of the 183-by-23-mile-long berg to Julie Palais in the office of polar programs at the National Science Foundation, who in turn forwarded it to MacAyeal. "Is this the same iceberg that you mentioned last week?" wondered Palais. 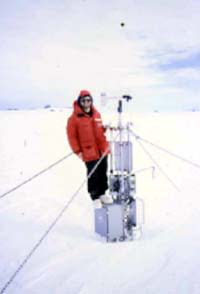 Now MacAyeal and his colleagues at the science foundation are tracking the progress of B-15 with some trepidation. Unlike their antipodean cousins, Antarctic icebergs usually get trapped in a circumpolar current that keeps them "swirling like a whirligig around the continent," says MacAyeal. That prevents them from wandering into major shipping lanes farther north. But B-15 might cause trouble closer to home. Since March, it's been drifting west toward Ross Island, home of McMurdo Station— just as MacAyeal had warned. The mammoth berg also broke in two in May, although the parts have remained in close proximity. In the first six months, they traveled about 100 miles to the west; at that rate, they could easily intercept McMurdo's shipping lanes by spring.

Before that happens, MacAyeal and his colleague Matthew Lazzara of the University of Wisconsin at Madison's Antarctic Meteorology Research Center hope to put weather stations and global-positioning transponders on each of the iceberg's pieces, so that both the bergs' positions and the conditions governing them can be determined with greater precision. Satellites aren't so good at relaying local features of weather— such as wind— that might affect iceberg navigation. And because clouds can obscure their view, satellites can often miss the finer aspects of iceberg movement that would help build a knowledge base for predicting, and even controlling, the paths of the biggest bergs.

"These giant icebergs last for decades without melting, and during those decades, they travel thousands of miles," says MacAyeal. "The only problem is that their travel is undirected. In the back of my head there's an inkling of a possibility that we might learn enough about icebergs to someday direct one up to Los Angeles. An iceberg the size of B-15 would supply the city's water needs for 500 years."

And the water would be pure as the driven snow— snow that has covered Antarctica for thousands of years, forming an ice sheet more than a mile thick that slowly slips toward the sea. So far, MacAyeal doesn't see any evidence that global warming is affecting the Ross Ice Shelf and its calving, but other researchers report that the ice sheet appears to be thinning in peripheral parts of Antarctica. More definitive information may be available in a few years, after MacAyeal posts automated weather stations and seismic sensors on the shelf. He's hoping to learn more about how ice fractures form and propagate before breaking off into bergs. With any luck, the instruments will be up and running before the second half of the ice front calves. And from the seismic vibrations that accompany its departure, MacAyeal might be able to discern the sound that the birthing of an Antarctic iceberg makes when no one is there to hear it.

"We'd like to have the instrumentation in place so we'll be able to know what's going on when it happens," says Lazzara. "It might just very gently and very quietly go."

See satellite images of icebergs at the Web site of the Antarctic Meteorology Center: uwamrc.ssec.wisc.edu/amrc/amrcgallery.html.