With Summer's Unequalled Warmth, 2014 is Likely to Finish as the Warmest Year on Record for the Home Planet 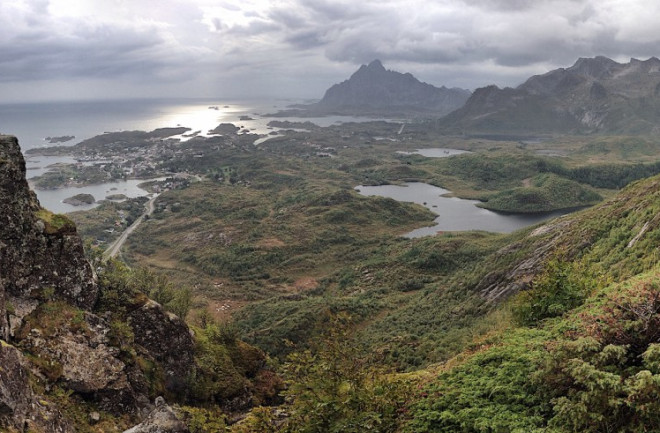 Towering, glacier-carved peaks loom over the sea in the Lofoten Islands near Svolvær, Norway in this iPhone photomosaic of four images captured on September 11, 2014. This part of the Arctic experienced its warmest summer on record. (Photomosaic: ©Tom Yulsman) August and the summer of 2014 have both gone down in the books as the warmest such periods since modern record keeping began in 1880, the National Oceanic and Atmospheric Administration has announced.

Lofoten Islands near Henningsvær, Norway. Please click to enlarge. (©Tom Yulsman) And with a warmth-bringing El Niño probably emerging, the odds are very good that the rest of the year will be warmer than the long-term average — which means we're likely on track for 2014 being declared the warmest year on record. So you might be wondering: Why the photo above of rugged mountains rising right up from the water in Norway's Lofoten Islands, as well as the thumbnail photo to the right from the same area? Here's part of the reason:

This map from NOAA shows how temperatures over land and sea varied from the long-term average during the June through August period. Among other things, it suggests why Midwesterners might be scratching their heads over the news that the summer was the warmest on record — and it serves as a useful reminder that just because it may have been cool where you live doesn't mean that people elsewhere in the world were donning sweaters in mid-July.

In fact, during my recent visit to Norway's Arctic region — which I've circled in yellow in the map above — folks noted that they had to strip off their sweaters this summer. You can understand why if you note that deep red color within the yellow circle. It indicates that this area experienced record warmth.

To make this more concrete, consider that on July 10, Tromsø, Norway experienced a high temperature of 84.5° F (29.7° C) — a record breaker for this lovely city, which markets itself as the capital the Arctic. To put that temperature in perspective, also consider that during the hottest day of the year, which typically occurs in late July, the average high has been no more than 60°F.

But again, YMV depending on where you live.

Overall, the average surface temperature of the land and sea for the June–August period was 0.71°C (1.28°F) above the 20th century average of 16.4°C (61.5°F). This beat the previous record high for the period set in 1998 — a year that went down in the books as the warmest up until that point, thanks in part to a super duper El Niño.

Lastly, here's why 2014 may well end as the warmest year on record:

As the global record above shows, the year to date is the third warmest such period on record. And as the NOAA report states:

If 2014 maintains this temperature departure from average for the remainder of the year, it will be the warmest year on record.

Anything can happen, so we'll have to wait and see. But even a weak El Niño, which is forecast to emerge starting this month, would make this a likely outcome. That's because El Niño conditions tend to boost global average temperature.