Higher levels of carbon in the atmosphere might give evergreen trees an advantage. 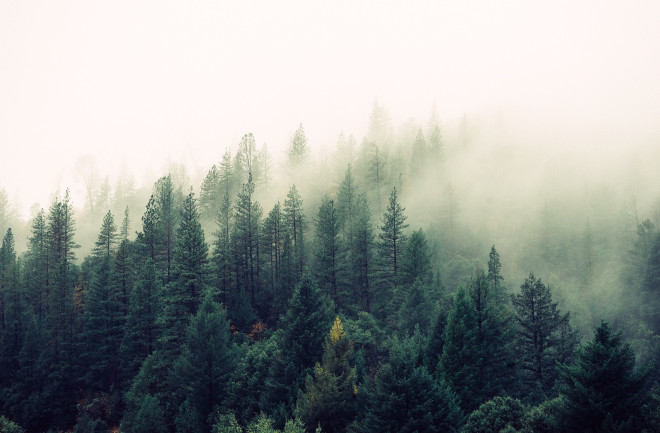 More carbon in the atmosphere might give evergreens a competitive edge over deciduous trees, or those that lose their leaves, according to new research in the journal Science Advances.

As CO2 levels rise, evergreens — pines, spruces and their relatives — use water more efficiently. In drought, that might help these trees survive over birches, oaks and other deciduous varieties. Furthermore, they might have an even greater advantage in cooler climates, like in Ireland or the northern U.S.

The team compared leaf samples collected between 1988 and 1991 to leaves they pulled recently from the same species and locations, down to the exact GPS coordinates, says study co-author Jennifer McElwain, a paleobotanist at Trinity College Dublin in Ireland. Samples of the leaf datasets showed the researchers how much of two carbon varieties resided in the leaves — one version that trees select when they have water to spend, another that they’re willing to accept when they’re in drought mode. The ratio of the two carbons indicated how efficiently the plants were using water.

Though the team looked back in time to distinguish how trees become efficient with higher CO2 levels, what they saw might predict how forest tree populations will shift as climate change continues.

The speed of the shift was especially notable to the researchers. “What’s surprising is that we've detected this significant of a difference in 20, 30 years,” McElwain says. Though forests grow slowly, evergreen numbers might expand as climate change progresses.

To take in CO2, trees open up holes in their leaves called stomata. Those open pores also let moisture escape. Trees have a few techniques to cut back on how much water they lose, and researchers know that higher CO2 levels push trees to conserve water. What kind of trees do this best was still somewhat of a mystery. Since atmospheric carbon levels have risen in the last 25 years, McElwain and her team decided to see if they could identify a change in tree efficiency in that time.

Though it depended on the species, they found evergreens overall, and especially in colder climates, became more efficient with their water use. This shift is backed up in deep time, too: When the Earth had higher CO2 levels 50 million years ago, evergreens thrived in higher latitudes, McElwain says.

The team thinks that as the rising CO2 continues, droughts (another shift climate change will magnify) would mean the more water-efficient evergreens would stand a better chance of surviving. It could ultimately mean that our forests might begin to look different as climate change progresses as evergreens begin to take over from other species.

Granted, the team studied forests that haven’t seen many other changes, like how much rain they got, in the past few decades. And because trees will also adjust to different nutrient availabilities and temperatures as climate change progresses, those factors might influence which varieties dominate. And even if evergreens do take charge in our forests, “if there’s a new emergent pest, then it doesn’t matter how little water there is,” McElwain says. Whoever has better pest defenses wins.

But, for now, the team is going to dive deeper into their data and see if they can come up with some species recommendations for foresters looking to plant more climate-prepared trees. Though their study is one glimpse into the possible future for forests, “what’s most powerful is to use data from living trees in their natural habitats, subjected to human-caused climate change in the last 30 years,” McElwain says.