British, Dutch, and German engineers, architects, and aerodynamicists have teamed up to bring wind power to urban areas. The group designed a sleek twin-tower building with 100-foot-wide turbines nestled between elevated walkways. The boomerang-shaped buildings allow reasonable office space while optimizing the flow of air. "They take winds from many directions and funnel them through the turbine," says Neil Campbell of BDSP Partnership, a London engineering firm that leads the consortium. A 21-foot-tall prototype functions well even in winds that are 60 degrees off center. The full-sized version would be 48 stories high, with three turbines that could produce about 20 percent of the building's power needs. Campbell says energy savings would more than offset the building's higher initial cost. 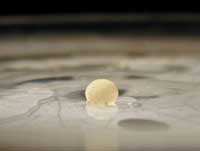