An advanced form of recycling promises to fully reuse our plastic products. Some scientists aren’t so sure it’s a good idea, though. 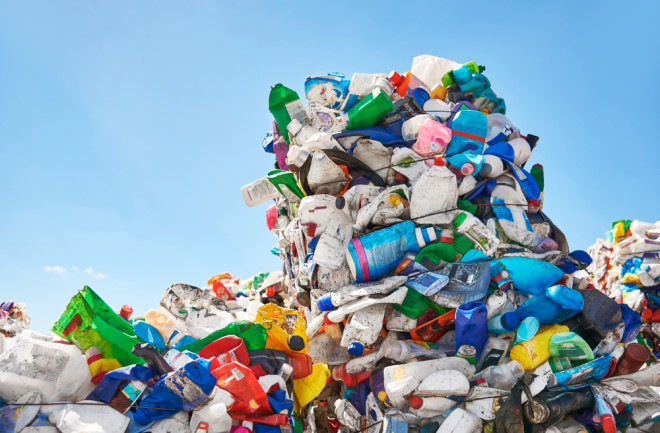 Throwing your plastic soda bottle or lunch container in the recycling bin feels like an easy win for the environment. The plastic gets reused, creating less waste and a fossil fuel use. But the reality is less appealing. In the U.S., less than ten percent of plastics get recycled every year. In fact, in 2018, the U.S. burned almost twice as much plastic as it recycled, according to the Environmental Protection Agency. It’s a big obstacle to the ideal of a circular economy, where everything we throw away gets turned back into something useful.

The most common way of recycling plastic is by chopping it into an avalanche of tiny flakes and then melting down and reforming them. The resulting plastic can be brittle and weak, and in many cases manufacturers simply prefer using new, or virgin, plastic. That requires them to use oil taken from the ground, even as society is attempting to move away from a reliance on fossil fuels. And many of those products — plastic grocery bags, soda bottles, ballpoint pens and millions more — get used and then thrown away, piling up in landfills or ending up in the ocean.

A process known as chemical recycling could be the solution. Plastics are made of long chains called polymers that can be thousands of molecules long. Chemical recycling involves breaking those chains into individual units, called monomers.The monomers can then be refashioned into polymers, creating plastics that are as supple and strong as before. There are a number of ways to potentially chemically recycle plastics, from using high temperatures and pressures to chemical solvents.

In recent years, a number of companies in the U.S. and Europe have begun attempting to build chemical recycling facilities. Some of these plants are supported in part by the plastics industry, which has an obvious interest making its products more sustainable. But none has reached the point of handling anywhere near to the volume necessary for a circular economy. Additionally, some scientists point out that chemical recycling methods still use too much energy to be viable, and can release dangerous chemicals during the recycling process.

Chemical recycling can be done in a number of ways, but they all boil down (sometimes literally) to breaking apart the long polymer chains that make up plastics. These polymer chains vary from plastic to plastic, and different configurations and chemical makeups imbue plastics with different properties, such as strength, flexibility or heat resistance. By breaking a plastic down into something much closer to the basic molecules it was created from, chemical recyclers can essentially start anew.

One way to do this is a process known as pyrolysis, which involves heating plastics to temperatures of anywhere from around 500 to over 1,500 degrees Fahrenheit in a low-oxygen environment. Without oxygen, the plastics can’t catch on fire, and instead break down into smaller hydrocarbons which can be used to make new plastics. A similar process known as gasification heats plastics to produce a product known as syngas that can be used for fuel or to make more plastics.

Other methods rely on the use of chemical solvents to break down plastics. This can be a combination of methanol, glycol, ammonia and other chemicals, and the process usually requires high pressures and temperatures. The solvents will break down polymers into shorter chains, much like pyrolysis and gasification do, to then be reformed into new plastic.

The basic premise of chemical recycling sounds simple: Take apart the old stuff and make new stuff out of it. But in reality that process is far more complex. As a 2020 review commissioned by the Global Alliance for Incinerator Alternatives notes, when most plastics are broken down they create not just fresh monomers but also a range of chemical byproducts. PVC, a common plastic used for pipes, cable housings, automotive interiors and more, creates a range of new chemicals when it’s heated and depolymerized, for example. Something similar occurs with most other plastics.

Not only do these byproducts add cost and inefficiencies to the recycling process, some of them can be harmful to human health. Substances like styrene, formaldehyde, ethylene, epoxy resins of BPA, and vinyl chloride that result from the processes of chemical recycling have all been found to be toxic.

Some chemical recyclers turn the plastic into fuels like diesel, instead of into new plastics. While that tactic prevents plastics from going into landfills, it creates new greenhouse gas emissions as the fuel is burned. Turning plastics into fuel doesn’t count as truly recycling them, experts say, because they’re ultimately used up.

The amount of energy necessary to power the chemical recycling process is also likely to be substantial. While some of the heat from the process could be recovered and turned into energy, a recycling plant would still draw heavily on outside power.

Once plastics have been broken down, further processing is likely to be necessary to turn them back into usable items, the review authors note. This could add further costs and energy requirements, the review authors say, making chemical recycling both less sustainable and more difficult to fund.

“Chemical recycling (both thermolysis and solvent-based) is not at present, and is unlikely to be in the next ten years, an effective form of plastic waste management,” the authors conclude.

Those potential drawbacks aren’t stopping a bevy of startups from attempting to implement chemical recycling on an industrial scale. They rely on a diverse range of methods to do so, and most have yet to advance beyond small-scale test facilities. Still, these companies are making big promises. The United Kingdom’s Mura aims to process a million metric tons of plastic a year globally by 2025, which is around a fifth of the country’s yearly plastic consumption. Similarly, Norway’s Agilyx recently announced plans to build a plant capable of handling 50 to 100 tons of polystyrene a day in Los Angeles, in partnership with polystyrene producer AmSty.

Plastic Energy, also based in the U.K., recently announced a partnership with ExxonMobil to build a new recycling plant in France capable of converting plastics that currently can’t be recycled back into usable monomers. That feedstock will then be used at ExxonMobil’s petrochemical plant nearby.

Other companies have set more modest goals. U.S.-based Brightmark hopes to take plastic and turn it into low-sulfur diesel and industrial wax. A plant under construction in Indiana and slated to open this year could process 100,000 tons of plastic a year, the company says.

For now, these efforts remain largely experimental. But, should they begin living up to their promise, chemical recycling plants may begin revealing a path toward a more circular economy for plastics. That would reduce our reliance on fossil fuels and mitigate the plastic waste clogging landfills and oceans. But as many scientists and environmentalists point out, this kind of recycling seems destined to come with its own set of drawbacks and complications. With diligence and effort, perhaps we can solve those issues — only time will tell.