The "Mouth of Hell" is a giant depression, and it's getting bigger due to global warming. 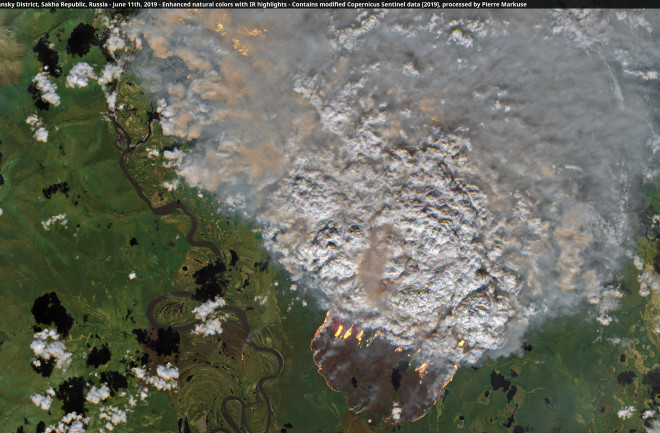 Wildfires blazing in Siberia, as seen by one of the Sentinel 2 satellites on June 11th. (Credit: Copernicus Sentinel image data processed by Pierre Markuse)

I started writing this post last week after seeing the stunning satellite image above showing a blazing Siberian wildfire.

When I returned to finish the post today, I learned from a story in the Siberian Times that wildfires in this part of Russia’s Sakha Republic are now threatening a spectacular landscape feature known among locals as the “mouth of hell.”

They regard it as a doorway to the underworld.

Called the Batagaika Crater, it’s actually a giant gash in the local permafrost more than a half mile long and nearly 300 feet deep — and it has been growing, thanks to warming temperatures. If flames should reach it, the ground around it could be destabilized, potentially causing the mouth of hell to gape even wider.

More about that in a minute. But first, some details about the image of the wildfire itself.

It was created by blogger and remote sensing expert Pierre Markuse using visual and infrared data from a Sentinel 2 satellite on June 11.

The image shows huge amounts of smoke rising high into the atmosphere near the town of Batagay. Also visible: Features that appear to be flames.

They’re not, at least not as flames would look to our own eyes. Rather, these are the infrared signals — the heat — given off by the Batagay blaze’s flames.

As I’m finishing this post on June 18, the fire is still burning. And since June 11, other blazes have erupted in Siberia. Broad swaths of the high northern latitudes. including Siberia, have been experiencing unusually warm temperatures lately.

The Siberian Times story reports that as of June 13, the Batagay fire was about 10 miles from the Batagaika Crater. (My eyeballing of satellite imagery suggests it’s farther away than that.)

Seen in the Tweeted photo above, the crater is the largest of its kind in the world. It formed in the 1960s after logging removed tree cover that had been shading the permafrost. The frozen ground began to melt, causing collapse and formation of the crater.

The annual mean temperature trend from data recorded at a weather station in the same region of Siberia as the Batagaika Crater. Temperatures have been rising since the late 1960s. (Credit: NASA GISS)

With rising temperatures, the crater has expanded steadily. As of 2017, the crater had been expanding by an average of 33 feet per year, and as much as nearly 100 feet during warm years.

Now we have two phenomena connected to human-caused warming converging: the widening “mouth of hell,” and the nearby wildfire. With continuing climate change, I expect we’ll see more such juxtapositions.