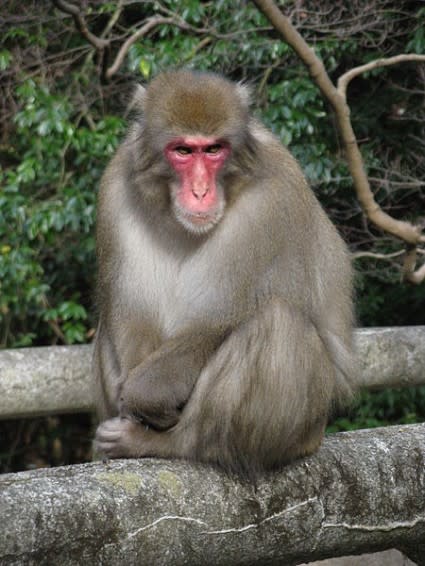 How do you do to measure radiation levels in the hard-to-reach forests near Japan's Fukushima Daiichi plant? Why, fit wild monkeys with radiation sensors, of course! Researcher Takayuki Takahashi tells CNN that his team plans to fit three monkeys in early 2012 with collars that measure radiation, as well as GPS units that record location and distance from the ground. The researchers plan to leave the monitors in place for about a month, before detaching them via remote control and picking up them up to retrieve their stored data. The information thus gathered will help scientists understand how radiation travels through the environment and the effects it may have on humans and animals. Radiation levels in the area have been monitored from the air by helicopter, but this has yielded an incomplete picture of what's going on at ground level. By fitting sensors on the monkeys—who rove along the ground and high in the trees—the researchers may get a better understanding of how radioactive fallout varies by elevation and differs between various habitats. The project will take place in Minamisoma, a mountainous area just outside the exclusion zone about 16 miles north of Fukushima Daiichi where as many as 14 groups of wild monkeys live, according to the Wall Street Journal. The team plans to fit more monkeys with collars in the near future, and may also enlist the help of wild boar. [via CNN and the Wall Street Journal]