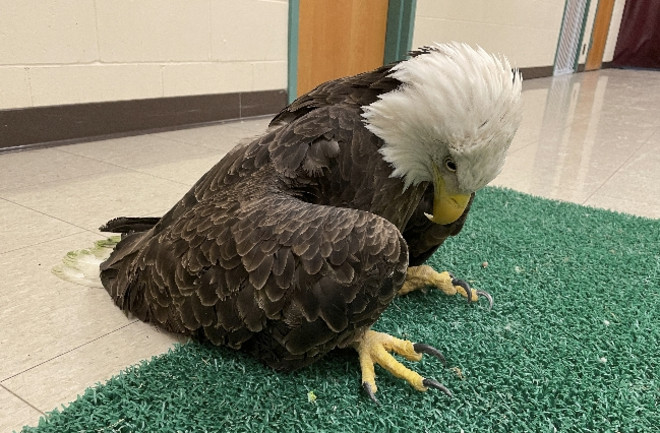 This bald eagle was admitted to The Raptor Center in St. Paul, MN where it was determined to be poisoned by lead. The bowed head, drooped wings, and green stained tail feathers are typical signs of lead poisoning in raptors. (Credit: Photo courtesy of The Raptor Center, Saint Paul, MN)

Bald eagles had a near death experience in the 1960s. But with a ban on the pesticide DDT, along with vigorous conservation efforts, the majestic birds have roared back from the verge of extinction.

Now, however, both bald and golden eagles are facing another serious foe: lead.

Nearly half of these eagles in North America are suffering from widspread and frequent lead poisoning, according to a first-of-its-kind study published recently in the journal Science. The poisoning typically occurs when an eagle eats lead ammunition fragments lodged inside an animal carcass, or in gut piles left behind when hunted game is dressed in the field.

“This is the first study of lead poisoning of wildlife at a nationwide scale, and it demonstrates the unseen challenges facing these birds of prey," says Todd Katzner, one of the study's authors, quoted in a release from the U.S. Geological Survey. "We now know more about how lead in our environment is negatively impacting North America's eagles.”

This adult female golden eagle was recovered dead approximately 1.5 miles from where it was nesting in Yellowstone National Park. The eagle, which had been outfitted with the GPS transmitter visible on its back, was determined to have died from lead poisoning. (Credit: Connor J. Meyer via USGS)

Lead poisoning occurs in predatory birds worldwide. But how much of a problem this posed across the United States was not well known. To get an answer, the scientists evaluated lead exposure in 1,210 bald and golden eagles from 38 U.S. states, including 620 live eagles.

"We detected unexpectedly high frequencies of lead poisoning of eagles," the scientists write. They found that nearly 50 percent of the birds sampled showed evidence of repeated exposure to lead.

It's estimated that this this degree of poisoning suppresses the population growth rate for bald eagles by 3.8 percent, and for golden eagles by 0.8 percent. "Lead poisoning is an underappreciated but important constraint on continent-wide populations of these iconic protected species," the study authors conclude.

This is not as much of a problem for bald eagles as it is for golden eagles. That's because the population of bald eagles is growing at 10 percent each year in the United States. At the end of the 2019 breeding season, there were more than 300,000 of the birds in the United States — 4.4 times more than in 2009, according to a U.S. Fish and Wildlife Service report. Even so, the impact could build like compound interest, year after year.

An immature bald eagle perches atop a tower of a high-voltage electrical transmission line near Niwot, Colorado in January of 2021. (Credit: ©Tom Yulsman)

"Although we did not test hypotheses to explain this, our data suggest that despite the rapidly increasing numbers of this species, their continent-wide populations are still vulnerable to negative demographic consequences associated with lead poisoning," the study's authors write.

Golden eagles are more vulnerable because their population is more on the edge. In 2016, there were an estimated 40,000 golden eagles in the United States.

The eagles aren't the only birds threatened by lead. Many studies have documented lead poisoning in a host of species, including the California Condor, upland game birds (such as mourning doves, ring-necked pheasants, and wild turkey), and waterfowl. Lead also poses a risk to other kinds of animals — including us. Fragments of lead bullets used to shoot deer and other game can wind up in the meat.

Luckily, there is an alternative to lead amunition: copper bullets. They are known to be extremely effective. Although more expensive, the switch could bring large benefits to wildlife, as well as to hunters — and particularly their children — who consume wild game.