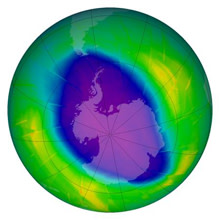 Twenty-five years ago this month, British scientists announced their discovery of the ozone hole over Antarctica. That bolt from the blue spurred perhaps the best-coordinated international response to an environmental crisis to date. Now, scientists can't help but wonder: Why didn't the same thing happen with climate change?

Looking back on the ozone problem: Even before the discovery of the hole in the ozone layer—that blanket of three-oxygen "ozone" molecules that protect us from much of the sun's ultraviolet radiation—researchers worried about pollutants destroying those highly reactive molecules. The British scientists' 1985 announcement confirmed that daunting reality.

Technically a substantial thinning of the ozone layer, the ozone "hole" has been opening every spring since the 1970s, the scientists reported. Their data, collected at the Halley Research Station in Antarctica, suggested that CFCs were to blame. That's because atmospheric conditions during the cold, dark, Antarctic winters were building stockpiles of CFCs over the South Pole [National Geographic].

But only two years later, in 1987, the United Nations approved the Montreal Protocol against the use of CFCs, and it took effect in 1989. Today the ozone hole still opens up—and it's still large—because problematic pollutants like chlorine linger for decades. Thus, the ozone layer may not return to its former fullness until the late 21st century, but quick international action did stabilize the problem.

Given that success, the British scientists couldn't help but look back on the anniversary of their discovery and ponder the vast difference between the global response to the ozone hole and the lingering hostility and uncertainty that keeps climate negotiations stuck in neutral. Writing in this week's edition of the journal Nature (where the team published the original study in 1985), ozone hole co-discoverer Jonathan Shanklin notes that his find presented a clear danger, with clear solutions:

The public was keen to see action: the evidence was strong and clear; the hole sounded threatening; and there was a link between thinning ozone and cancer. And the public did not feel bullied or threatened — no one was telling them to radically change their way of life. There was a problem, and something could be done about it. By contrast, the evidence for man-made climate change is less clear-cut to the average person. And people are given the impression that civilization will collapse unless they abandon cars and radically change their lives in other difficult ways. Not surprisingly, there is confusion and resistance [Nature].

Joe Farman, another co-author of the original ozone paper, was much more candid in his assessment of climate science, given in an interview with the BBC this week.

He criticised politicians for failing to lead on issues like climate change - it was "damned stupid" to keep increasing emissions of CO2 when we know it is a warming gas, he said. But, in a nod to climate sceptics, he also blamed the scientific establishment for failing to take specific criticisms of detailed climate science seriously enough [BBC News].