Why New Zealand's Earthquake Was So Deadly 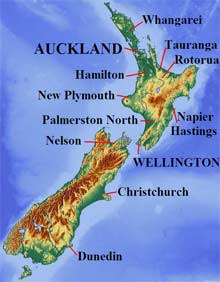 At least 65 people died in an earthquake that struck New Zealand's second-largest city, Christchurch, yesterday. As the city digs out from the rubble created by the magnitude 6.3 quake, some there are worried the death toll could climb into the hundreds. And as seismologists unravel the details, it's becoming clear why this quake was so much deadlier than previous seismic events in New Zealand.

Photographs and video from Christchurch, a metropolitan area of nearly 400,000 residents, showed people running through the streets, landslides pouring rocks and debris into suburban streets and extensive damage to buildings. Witnesses told of watching the spire of the iconic Christchurch Cathedral come crashing down during an aftershock. One witness called it “the most frightening thing of my entire life,” and television footage showed a person clinging to a window in the cathedral’s steeple. [The New York Times]

This is the second major earthquake

to hit the Christchurch area in five months. The one last September was larger, but caused much less damage. It's another reminder that the depth and location of a quake—and not just its magnitude—make a great difference in how deadly it is. In addition, this one's epicenter was merely a few miles away from the city center.

Last year's 7.1-magnitude earthquake was more than 10 times as strong as today's but caused no deaths, probably because it occurred at greater depth and further away from Christchurch: its epicentre was 70 kilometres west of the city. And the focus of September's quake was some 10 kilometres below ground – today's was half as deep. "The ground motion [of the previous quake] had significantly attenuated by the time it reached Christchurch," says Adam Pascale, a seismologist at Environmental Systems & Services in Richmond, Australia. [New Scientist]

at the intersection of the Pacific and Australian tectonic plates, seen here

. The stresses between those two have created broken fragments beneath the islands. The Alpine Fault

, which carries much of the stress beneath South Island (where Christchurch sits), has seen its fair share of major quakes

before. It may take seismologists some time to sort out the specifics of the quake, but a few are already speculating

that it happened along the same fault line as the one that caused last September's event. Related Content: 80beats: Chile’s Disastrous 2010 Earthquake Didn’t Dissipate the Seismic Stress

80beats: Why Chile’s Massive Earthquake Could Have Been Much Worse

80beats: Uh-Oh: Another Quake Could Be Looming on Haiti’s Main Fault

DISCOVER: The Next Big Quake