Why More Parasite Diversity is Good News for Frogs 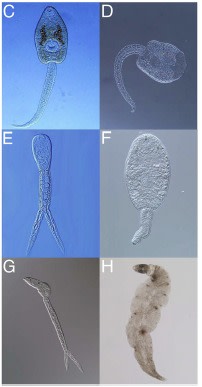 The enemy of my enemy is my friend---especially if I'm a frog and my enemies are competing parasites. A recent study

actually had lower rates of infection, with fewer frogs in the group afflicted with tiny hitchhikers. Researchers at the University of Colorado-Boulder bred Pacific chorus frogs in a lab and put their tadpoles in different tanks with anywhere from one to six different types of flukes. On average, 40% of the frogs that came into contact with only a single fluke species developed infections, while 34% of frogs exposed to four flukes and 23% of frogs exposed to six flukes were infected (the numbers for two, three flukes followed a roughly similar trend). Additionally, some of the fluke species make frogs sicker than others, and oddly enough, the frogs exposed to a greater variety of flukes had a lower proportion of infections from these dangerous species. Most research on host-parasite interactions has focused one host--one parasite, but as this study shows, it's a lot more complicated in the natural world. Preserving biodiversity---even biodiversity of creatures, whether flukes or microbes, that we're not fond of---might be an important part of keeping disease down. Why that is isn't exactly clear---the scientists who did this study, for instance, aren't sure why frogs were better off with lots of flukes around. But it could be analogous to what happens in humans who have the biodiversity of their gut microbes disturbed by antibiotics. Once healthy, or at least relatively harmless, microbes are wiped out, it's easy for dangerous bacteria like

to take over their real estate and cause life-threatening disease

. Something similar seems to happen with viruses: having certain viruses in your body can keep you from getting infected by other, more harmful pathogens.

In fighting off infections, thus, it could help to have allies among the enemy. [via NYT Green