Why It Feels Like Seagulls Are Everywhere but the Sea

If they are moving inland, it's probably our fault. 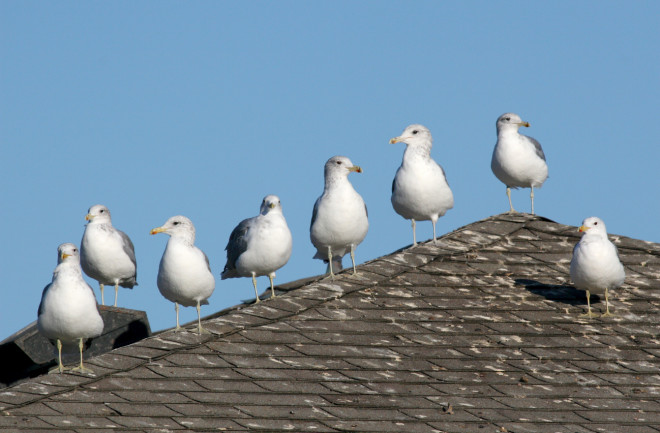 Maybe they’re pooping on passersby more often — or possibly more people are reporting a theft of their lunch. No matter the inciting incident, some communities are convinced that more gulls have moved from the coasts and into their cities.

If these anecdotes are to be taken as fact, gulls, a group of 40 species that people tend to lump together and call seagulls, could be your newest neighbors (or commute partners). A flock now occupies the roof of a train station in Frankfurt, Germany, says Alejandro Sotillo, an ecologist at Ghent University in Belgium. But what we think are soaring gull numbers could be an illusion hiding how the raucous birds are faring over all.

Despite the more recent chatter, some groups of the birds have lived deep inland for a long time. A group of white-headed gulls have lived in landlocked Belarus since the early 2000s, for example. And a cohort of lesser black-backed gulls thrive in the even more remote Siberia, Sotillo says.

In North America, the species that typically pull off the move are ring-billed and herring gulls. These smaller kinds of gulls are more likely to lose in fights for marine food sources when up against larger gulls like the great black-backed variety — potentially driving smaller species inland where food is easier to access, says Laurie Maynard, an ecologist at the University of Moncton in Canada.

Communities might say that there’s a new gull presence throughout town, but so far there isn’t good evidence showing that gulls are nesting farther inland than they used to — or spending more time soaring over cities for food. This is largely because tracking urban population fluctuations is extremely difficult. Getting above buildings to count bird nesting sites requires scaffolding or drones, Sotillo says, the latter of which could violate rules about footage of residential buildings.

A Safer Nest and Better Lunch

If it’s true that more gulls are moving inland, the pursuit of easy food might be a motivator. In the 1970s and '80s, the fishing industry threw away comparatively large portions of their catches. The byproducts fostered a boom in gull populations as the birds feasted on relatively easy, nutritious meals, Maynard says. Now that some of those fishing habits have changed — and stocks have been over-harvested, almost to the point of collapse — researchers think there are fewer aquatic meals to go around, potentially pushing gulls to find food elsewhere.

It’s possible that a shift toward new food sources and safer breeding grounds could be good for different species. The birds, pecking away at garbage, can be shockingly good at zeroing in on the most fruitful parts of dumps and farm fields: Rodents provide calcium for their bones just like fish do, Maynard points out. And some gulls may have realized that nesting on buildings keeps their offspring safe from predators, Sotillo adds.

But so far, research into how the birds fare show mixed results. In some studies, diving into garbage seems to help breeding success, while in others, the birds do better when they stick to more traditional food sources. Sotillo and his colleagues conducted their own study where they kept tabs on wild gull chicks while hand-feeding different birds in the lab with either an ocean-based or land-based diet. While all birds fed by the researchers gained weight, the wild birds being fed a land-based diet by their parents didn’t keep up. Sotillo concluded that maybe the adults simply couldn’t find enough decent food when foraging over land.

Is the City Big Enough for the Two of Us?

Because it’s so hard to determine whether more gulls are actually moving inland — and how that choice might be panning out for different species — it’s also not clear what these shifts mean for the future of the birds. Gull numbers have been declining since the golden era of good seafood in the 1970s and '80s, and no one knows how small a population of gulls can get while staying healthy and stable. Whatever numbers existed before humans started meddling with their survival, Sotillo says, we just don't know.

Gulls could make like pigeons and take to downtown life just fine. But even in that scenario, the birds are still threatened by what human residents think of them. “People in general don't like gulls in the city,” Sotillo says. “They are finding a livelihood in a place where they are not welcome.” Cities putting pressure on the birds to find yet another home might leave them with few places to go. Gulls used to nest along the Belgian dunes, Sotillo says, but communities developed much of the coastline and stripped the birds of their original habitat in the process.

The potential for humans to squeeze gulls out of any habitat is an issue for more than the birds. “It calls for reconsidering the way that we are exploiting space, and what we expect wildlife to do in response,” Sotillo says. In other words, our relationship with gulls is confrontational — and not just in the way they steal our fries.