During election years, opinion polls and surveys often drive national media coverage of political candidates. This is derisively known as horse race journalism. It is a style that has carried over to everyday political coverage. “I worry that politics is covered almost like sports at a relentless who's winning and who’s losing kind of way, who’s up, who’s down," New York Times executive editor Jill Abramson said said last year. The overall tenor of climate change reporting isn't like that. (I'll get to its dominant characteristics in a minute.) But every three or four months, there are poll-driven stories and blog posts that have a who's up/who'sdown flavor. That is because some researchers conduct regular public surveys on climate change-related questions. Anthony Leiserowitz, the Director of the Yale Project on Climate Change Communication, and Ed Maibach, the Director of George Mason University's Center for Climate Change Communication, are two such trackers of public opinion. Their work helpfully chronicles prevailing attitudes on climate change and in the case of Yale's Six America's report, has shed important demographic insight. Their latest survey findings were released this week in a report called, "Climate Change in the American Mind: Americans' Global Warming Beliefs and Attitudes in November 2013." I'm not sure how valuable this narrow snapshot is; nonetheless, here's what Leiserowitz found (my emphasis):

Naturally, that sizable uptick in the "global warming is not happening" category was headline bait. But I'm probably not the only one that was surprised to see the percentage of climate dismissives rise, given the jump in media coverage of climate change in 2013, with many of the stories linking warming temperatures to severe weather events and broader energy and security-related concerns. So why are more people suddenly inclined to think global warming is not happening? Here's the theory:

Media coverage surrounding the release of the IPCC report in September may be the explanation for the shift of more previously uncertain people into disbelieving climate change, Leiserowitz told LiveScience. While the report made a strong case for human-caused climate change, most media coverage focused on the question of whether there has been a "pause" in global warming.

Leiserowitz speculates that such framing may have reinforced doubt in the minds of those who were on the fence about global warming. He tells LiveScience:

Media frames can be really important in shaping the way people interpret the news.

No doubt this is true. Then again, this has been the dominant media frame for quite some time: 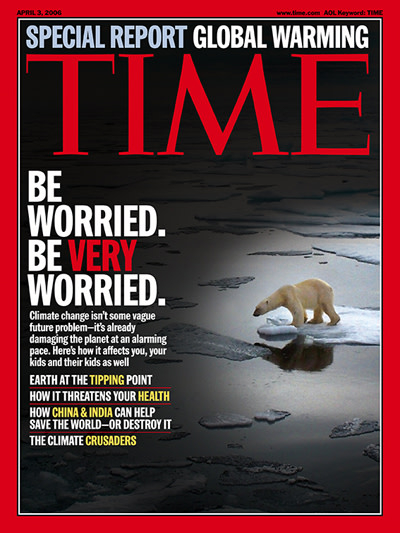 Now, if media frames are really that influential in the climate debate--with the biggest frame being the catastrophic message--then how do we explain this factoid also listed in Leiserowitz's latest report?

Half of Americans are worried about global warming, although few are "very" worried.

Indeed, the accompanying infographic shows that the number of Americans who are "very"worried about global warming has remained fairly constant since 2008, averaging about 15%. I can understand how a spate of confusing stories about a so-called "pause" in global warming might lead fence-sitters to suddenly jump into the denial camp. But then why isn't the incessant climate doom message in the media getting through to more than 15% of Americans? Lest you doubt just how dominant this frame is, let me point you to last year's "Climate Change in the Media" report by James Painter, published by Oxford University's Reuters's Institute for the Study of Journalism. The salient findings (my emphasis):

An examination of around 350 articles in three newspapers in each of the six countries with a combined circulation of at least 15 million showed that the dominant messages that readers receive were predominantly ones of disaster or uncertainty. The language of risk (and of opportunity) was much less prevalent. This was true for most of the climate change stories examined, and across the different media and political contexts of the six countries, and the range of newspapers. The disaster/implicit risk frame was present in more than 80 per cent of the articles, making it the most common frame. For coverage of three reports by the Intergovernmental Panel on Climate Change (IPCC), it was present in over 90 per cent of them. It was also the most salient (in the headline or first few lines) with 44 per cent of the articles containing the frame, more than twice the next most common frame. It was also by some margin the most dominant tone of all four frames with well over half the articles containing it.

This is no snapshot in time. This "be worried, be very worried" message has been the dominant media frame since those words appeared on the cover of Time Magazine in 2006. Why, then, are so few Americans very worried?