Why GMO Supporters Should Embrace Labels 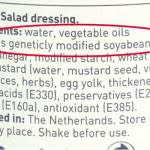 Image: Ecowatch.com Keith Kloor has graciously given me the opportunity to guest post here again. So let me cut to the chase: I support GMOs. And we should label them. We should label them because that is the very best thing we can do for public acceptance of agricultural biotech. And we should label them because there’s absolutely nothing to hide. Let me explain. First, so you don’t mistake me for a GMO-basher, let me introduce myself. I’m a computer scientist by training. I’m also the author of three books, all of which endorse the use of biotechnology to improve the human condition. In the most recent of these, The Infinite Resource, I talk about the power of innovation to save the world. In between chapters on climate change and fresh water depletion, solar power and desalination, I make a forceful argument that genetically engineered crops and animals can help us grow more food, with better nutrition, and less impact on the planet. I believe that. In the last two weeks I’ve written about the scientific consensus that GMOs are safe and the many reasons that advocates of organic food should love GMOs. And recently I went on MSNBC to make that case on national television. In short, I believe in science, and I believe that science tells us that our currently approved GMOs are safe for humans and good for the planet, and that next generation GMOs will be even better. So why label them? The short answer is this: by fighting labeling, we’re feeding energy to the opponents of GMOs. We’re inducing more fear and paranoia of the technology, rather than less. We’re persuading those who might otherwise have no opinion on GMOs that there must be something to hide, otherwise, why would we fight so hard to avoid labeling? My conversion to this point of view began in January, when Keith Kloor posted a letter he’d received from Jonathan Gilligan, an associate professor in the Department of Earth & Environmental Sciences, Vanderbilt University. Gilligan made several good points. It’s worth reading the whole letter. Will Labels Kill GMOs? Let me add to Jonathan Gilligan’s points. First, it’s undeniable that a large fraction of Americans want labels on GM food. An ABC News poll found that 93% of Americans want GMO labels. A more recent HuffPost/YouGov poll put the number at 82%. These are overwhelming numbers. They don’t reflect the scientific consensus on GMOs, but they do reflect the very real public fear and uncertainty around the technology. And more than that, they reflect a public view that labeling is common sense. GMO proponents (including me) look at this and worry, quite frankly, that GMO labels on food will massively drive down sales of genetically engineered foods, which would lead to less planting of genetically engineered fields and less research into new and better GMOs. If true, this would be a tragedy, for it would undo all the environmental benefits of genetically engineered crops that I’ve outlined previously. 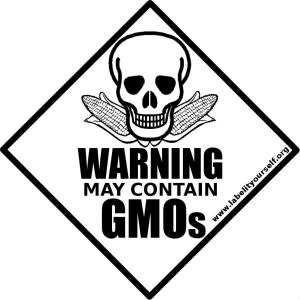 The wrong kind of label. Image from labelityourself.org And if the labels were warning labels, with a prominent skull and crossbones, they might indeed kill agricultural biotech. But they’re not. Or at least, they don’t have to be. GMO labels around the world are almost exclusively ingredient labels, similar to the image at the top of this post. Those are the sorts of labels that can be agreed on now if the agricultural and biotech industries drive labeling or at least come to the table. Indeed, they’re the sorts of labels that my co-guests on MSNBC – all labeling proponents - insisted they wanted to see. No skull and crossbones – just something on the package that informed a consumer that GMO ingredients are present. That’s an important distinction, because the data suggests that GM ingredient labels would not change how consumers shop, by much, if at all. Experiments with GMO labels in France (PDF link) have shown no detectable change in customer buying patterns. Other studies in more than a dozen countries have shown the same. Even when a change is found, it tends to be quite small. For example, a study of GMO labeling of cooking oil in China (PDF link) showed a drop of around 4% in market share of GMO oils after labeling, noticeable but not large. Surveying all the worldwide data through 2011, Elise Golan and Fred Kuchler found that “labeling has negligible impact on consumer choice.” Far from the end of the world, GMO labels – of the right kind - are likely to have little to no impact on sales of genetically engineered foods.

On the flip side, I’ve come to believe that the fight against labeling massively harms the perception of genetically modified foods. First, there’s the impact on consumer fear. Jonathan Gilligan points out that classic risk-perception studies show that people are less frightened of a threat when they feel that they can identify and control their exposure to the threat. Science blogger Ed Yong wrote a terrific piece on this topic in 2008, titled “lack of control drives false conclusions, conspiracy theories, and superstitions.” Do “false conclusions, conspiracy theories, and superstitions” sound at all like the most strident wings of the anti-GMO movement, and the memes they spread through the wider society? I think so. While the scientific data shows that GMOs aren’t a threat to people’s health, very few Americans are confident of that. In the latest HuffPo/YouGov poll, 35% of Americans believed that GMOs are unsafe to eat, and another 44% are uncertain. Among the most hardcore believers of GMO health risks, very little is likely to change minds in the short term. But among the large set with weak beliefs or uncertainty, the risk perception studies suggest that the lack of labeling has the effect of boosting fear. And that fear itself is a bigger risk to the future of genetically engineered crops than labels are. Boost people’s perception of control instead and we may see a reduction in the ease with which false conclusions, conspiracy theories, and superstitions spread into the persuadable middle. The second way the lack of labeling hurts GMO perception is by deepening distrust of the scientists, institutions, and companies creating and selling genetically engineered foods. Anti-GMO sentiment is already extremely mixed in with anti-corporate sentiment and suspicion. Among the many tweets directed at me during and after my MSNBC appearance, the most common themes were “All we want is disclosure” and “If you’re so proud of your GMOs, why don’t you label them?” 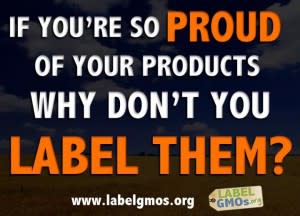 A simple argument that's hard to rebuff. Image from labelgmos.org. Those are extremely hard arguments to fight against. Replying “we’re worried that if Americans see a GMO label, they’ll be less likely to buy it” only strengthens the anti-GMO argument. At best it’s condescending to consumers, sending a signal that ‘we know better than you what you should eat’. And at worst it adds fuel to pseudoscience and conspiracy theorists who believe that labels are being withheld because Monsanto and other agribusiness concerns know that GMOs are harmful. Even the reply that states ‘The FDA doesn’t require a label because GMO food is functionally identical to non-GMO, and has absolutely no health risk’ (which I used on MSNBC) falls flat in the face of this response. Orange juice from concentrate is labeled. Food coloring Red #5 is labeled. Fish are labeled as to whether they’ve been previously frozen. To a consumer, there’s no plausible reason why these factors should be on a food ingredient label while the presence of GMOs shouldn’t be. Or rather, the only plausible reason most consumers can devise is that information is being intentionally withheld from them. That’s not the conclusion anyone who supports better crops through biotechnology should want to see consumers come to. Lead or Be Dragged Sooner or later, GMO labels are coming to the United States. With an overwhelming majority of Americans supporting labels, with prominent legislators introducing federal GMO labeling bills, as happened last week, with more than 20 states considering measures to label GMOs, it’s only a matter of time. The only question now is: Do GMO advocates want to be dragged along in this wave? Or do they want to help direct it? There’s a substantial difference between a patchwork of potentially conflicting state labeling laws and a unified system, between a bad labeling measure and one that’s sensible. The only reasonable choice for GMO proponents now is to embrace labeling and help lead the process. We should embrace it to help dampen consumer fear of GMOs. We should embrace it to help shape the labeling system into a sensible one. And we should embrace it because we have absolutely nothing to hide. About the AuthorRamez Naam is the author of The Infinite Resource: The Power of Ideas on a Finite Planet, a book about the power of innovation to overcome the environmental and natural resource challenges that face us, and the decisions we need to make to win the race between innovation and consumption.