Why Do So Many Plastic Bottles Wash Up On Inaccessible Island? It’s Ships, Scientists Say 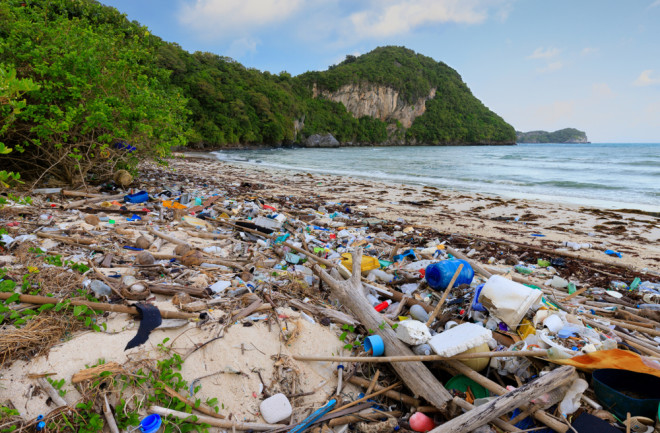 Shipping traffic accounts for a larger percentage of plastic trash in some parts of the oceans than scientists realized. (Credit: Stephane Bidouze)

Rafts of garbage, assembled by currents that swirl trash together, clog our oceans. But how did that material wind up adrift in the first place? A new study takes a look at the refuse that washes up on a remote island in the South Atlantic and arrives at a perhaps-unexpected answer: The trash is being dumped from ships.

The findings, published Monday in the Proceedings of the National Academy of Sciences, contradict assumptions that so-called “garbage patches” form when material floats away from beaches or land-based facilities. The research group’s detective work also suggests that ships are breaking anti-litter rules set by the International Maritime Organization nearly 30 years ago.

“The IMO needs to tighten up on ensuring ships use port reception facilities to offload wastes,” says study co-author Peter Ryan via email. He’s the director of the FitzPatrick Institute of African Ornithology at the University of Cape Town, and he studies both seabirds and ocean plastic. Boats docking with suspiciously little trash to offload might deserve more observation, he writes.

There are numerous trash swirls spread in a patchworkacross the oceans, and Ryan’s team chose to focus on just one for their study: the South Atlantic garbage patch. Specifically, the group focused on aptly named Inaccessible Island — an uninhabited patch of land halfway between Argentina and South Africa. The island is only reachable by boat and definitely not generating trash.

In 2018, the team hauled in waste from the shore and then patrolled the beach for new trash for two months, bringing in nearly 4,000 pieces of garbage. Though they collected all kinds of material, they focused identification efforts on the most common type of refuse: plastic bottles. The products are stamped with manufacturing dates and have distinct designs that give away their manufacturer.

Of the bottles that washed ashore during the beach patrols and had legible production dates, 90 percent were made in the previous two years. The research team also identified the manufacturer of about half of the bottles — 75 percent of them came from facilities in Asia, and half were from China specifically.

The garbage, then, must be coming off ships. And the sheer quantity implies illegal dumping, he says. “You can’t have that many bottles falling off accidentally and washing up day after day.” Since shipping routes between South America and Asia are gaining traffic, the authors conclude most of the waste is likely coming off trade vessels like cargo ships.

Similar studies in the 1980s showed most bottles around Inaccessible Island came from South America. But recently, Asia has overtaken them to become the dominant plastic polluter in the region’s waters. Still, Ryan says, to have bottles from the region now dominate the island’s perimeter “is a bit of a shock.”