Why Climbers Die on Everest: It's Not the Avalanches (or the Yeti) 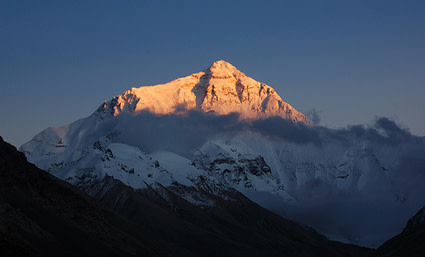 A new study has found that 1.3 percent of the ambitious climbers who test themselves on the world's highest mountain, Mount Everest, will die before returning to base camp, a higher rate than that of other peaks. The host of hazards

awaiting those who dare to climb the 29,000-foot (8,850 meter) Himalayan mountain include extreme cold, whipping winds, changing weather, treacherous climbs and avalanches. Oxygen content in the air is only a third of that at sea level [Reuters].

But the main cause of death isn't avalanches, falls, or respiratory problems brought on by the thin atmosphere, researchers found--nor is it monster attacks. "Nobody was attacked by any Yeti or anything else" [Reuters], study coauthor Paul Firth helpfully added. Instead, the most frequent cause of death is brain swelling brought on by the altitude, which is accompanied by confusion and lack of coordination. Study coauthor Kent Moore explains:

"With the low barometric pressure and lack of oxygen, there tends to be a seepage of fluid out of the blood vessels. When this happens in the brain, it causes swelling. It tends to impair cognitive function. That's probably what causes a lot of the deaths." Climbers with this problem fall behind, become lethargic, and may become disoriented - none of which has anything to do with their level of physical fitness [Canwest News Service].

The study, which will appear in the British Medical Journal, looked at

212 deaths that occurred during climbing expeditions involving some 14,000 mountaineers and Sherpas - natives of Nepal who act as guides for Everest climbers - between 1921 and 2006 [Canadian Press].

Researchers found that 73 percent of the fatalities occurred on the way back down the mountain, either after climbers reached the peak or after they aborted their attempt on the summit and turned back. Everest expedition leader Brian Jones says the findings confirm his observations that climbers are in the most danger when they refuse to give up on their dreams of reaching the summit, push themselves too hard, and run into trouble on the way down.

"That has long been known as the classic example of people just pushing themselves too thin .... If we can tell people 'Look, it's that one more day that kills most people,' that'll make it easier to pull the plug on summit day," said Jones, who led a Canadian expedition that reached the top of Everest in May [Canadian Press].

Related Content: DISCOVER: The Blind Climber Who Sees With His Tongue DISCOVER: The High Life explains the science of altitude sickness