There's no simple answer: Non-dairy milks vary widely in their nutritional content and impacts on the Earth. 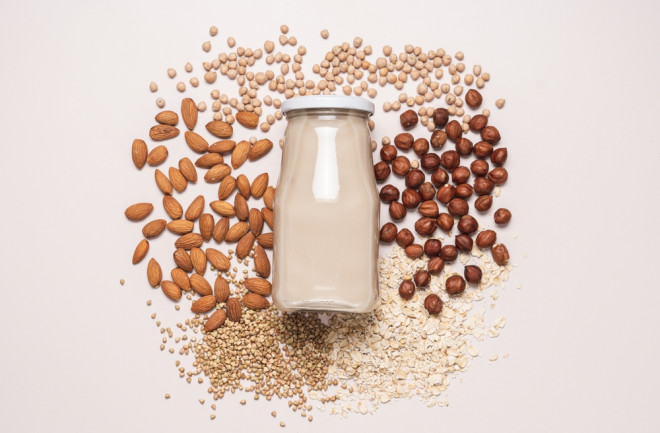 If you’re looking for the most sustainable plant-based milk alternatives to switch to, here’s some facts to consider:

The Environmental Impact of Dairy

The carbon footprint per kilogram of milk produced in the U.S. in 2007 is only 37 percent of that produced in 1944, according to a 2009 study published in the Journal of Animal Science. That’s because modern dairy practices are much more efficient and sustainable, using 90 percent less land, 77 percent fewer feedstuffs, and 65 percent less water to produce a billion kilograms of milk.

Although milk production has expanded over the years while simultaneously reducing resource use and carbon footprint, the industry’s overall environmental impact is still significant. Dairy cows’ enteric fermentation and manure, as well as the production of the cattle feed, emit significant amounts of greenhouse gasses (GHG). At present, the dairy sector is responsible for about 2 percent of the country’s GHG emissions.

“Dairy cows consume a lot of feed to produce milk, and the production of that feed requires significant agricultural inputs and land requirements,” says Gregory A. Keoleian, director of the Center for Sustainable Systems at the University of Michigan. “The greenhouse gas emissions from milk production come from the feed production, agricultural equipment, enteric fermentation — methane from cows — manure management, milk processing, transportation, and downstream packaging and refrigeration.”

Feed production and milk processing also require plenty of water. In the U.S. about 144 gallons of water are used to make just one gallon of milk. More than 93 percent of this water goes toward cultivating cattle feed. Dairy cattle harm both water and air quality as well, contaminating the water with nitrogen and phosphorus from manure and the air with ammonia produced from their urine.

In part due to the environmental consequences of dairy milk, a growing number of consumers are instead opting for plant-based alternatives. More broadly, plant-based foods have a lower environmental impact than dairy products because cows have to process large amounts of grains and other vegetable matter to produce milk, while the conversion of plant matter directly into dairy substitutes is more efficient, Keoleian says.

People often opt for almond, oat, soy and rice milk. However, the carbon footprint of different varieties of plant-based milk varies widely, and eco-conscious consumers are in search of the most sustainable milk option.

“The production of all foods from agriculture have environmental impacts — some smaller, some larger, and varying by which resources are being affected or used,” says Timothy Griffin, division chair of Agriculture, Food, and Environment in the Friedman School of Nutrition Science and Policy at Tufts University. “As with other animal-based foods, the impacts per unit — like a gallon of milk or a carton of yogurt — are higher than plants, but not uniformly across the different impacts.”

“There is no ‘best in all categories’ choice regarding plant-based alternatives, which is pretty much true of all things food and agriculture-related,” says Griffin. “There is also not a lot of data that allows us to directly compare the growing list of alternatives ... The general conclusion is that the impacts are smaller than milk from dairy cattle, sometimes by a little and sometimes by a lot.”

But all in all, dairy milk production results in about three times more GHG emissions and requires approximately nine times more land than plant-based alternatives, a 2018 Science study found.

Since plant-based milk is still as a whole more environmentally friendly than dairy milk, you could argue that one’s preference for alternative milk doesn’t matter as long as it’s not dairy. However, shoppers have other factors in mind, including nutritional content. Dietary restrictions vary from person to person, and avoiding dairy milk might not be as easy for some.

And each milk comes with pros and cons. Unlike dairy milk, almond and rice milk are very low in protein. Dairy milk is also high in calcium and vitamin D, which can’t be found in plant-based milk alternatives unless they have been fortified. Meanwhile, pea and soy milk are both high in protein, but the former is not widely available and the latter has a higher fat content. Oat milk might be a good choice for consumers since it contains fiber, iron and a moderate amount of protein. This option has sparked debate, though.

“Food differs from some other consumer goods in that it has deep cultural roles, so food choices have many influences,” Griffin says. “Although decision rules might be simpler if they are like a light switch — either on or off, either dairy or not — I tend to think of a dimmer switch as a better analogy. You can moderate your choices based on multiple factors, and those factors vary from [one] person to the next.”

Consumers can also reduce their carbon footprint in other ways instead of (or in addition to) avoiding dairy.

“The greater opportunity for reducing food impacts is in limiting meat consumption, which accounts for over 50 percent of greenhouse gas emissions, and beef in particular is the most carbon and water-intensive,” Keoleian says. He also recommends taking steps to reduce food waste, especially since around 30 percent of the country’s food supply ends up in the garbage. Ultimately, there are plenty of ways for you to reduce your environmental impact. For one, you can replace your old refrigerator with a newer, more efficient one to minimize your carbon footprint even further, he adds.