When Political Sensitivities and Science Collide with Religion 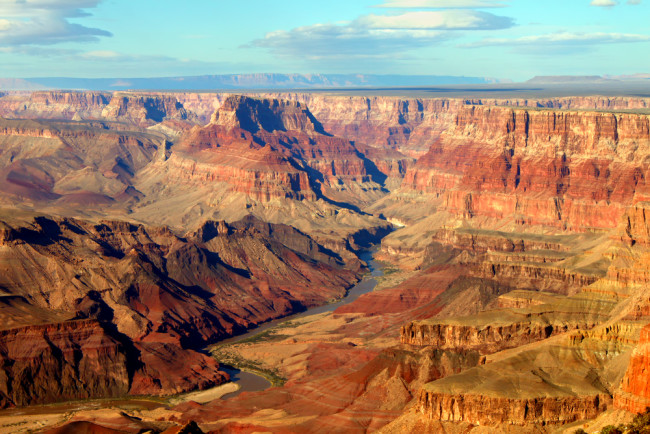 A decade ago, controversy erupted after it was revealed that a creationist book was being sold in six bookstores at the Grand Canyon National Park. It was a biblical explanation of the Grand Canyon. As Cornelia Dean reported

in the New York Times,

the book says God created the heavens and the earth in six days, 6,000 years ago, and that the canyon formed in a flood God caused in order to wipe out "the wickedness of man." The geology of the canyon proves it, the books' contributors say.

That's complete bunk, as Dean went on to lay out in the next paragraph. Nonetheless, the creationist text was made available to park visitors because it offered what the person in charge of the bookstores called a "divergent viewpoint." That rankled geologists. The story remained

in the news for years

, in part due to one environmental group that wanted to make political hay

of it. (The group wrongly traced the decision to keep the book in the bookstore to the Bush Administration, an assertion that many accepted at face value, perhaps because it fit a certain narrative

.) In any case, amidst all the uproar there wasn't much discussion of the Native American creationist myths

that were also on sale at the Grand Canyon National Park bookstores. For some reason, science advocates who chafe at a biblical story of the Grand Canyon aren't much bothered by American Indian creation tales that are remarkably similar, if you look closely

. Why the double standard? Perhaps it's because we view the Native American relationship to the Grand Canyon in more cultural or anthropological terms, as Arizona State University explains

One of the ways in which we trace Native American links to the Grand Canyon is through creation stories and other legends that have been carried down for centuries.

In other words, these are just quaint, harmless folk tales that nobody really takes seriously (wink, wink). Ah, but the contemporary Indian tribes that live in the Southwest take their origins very, very seriously. And because of this there are consequences for science, as I've written about

. (Indeed, the 2004 New York Times article I cite at the beginning of this post notes that "collisions between ideology and scholarship are nothing new at the Park Service.") What got me thinking again of all this was an excellent column

in this week's Science Times by George Johnson. An excerpt:

While biblical creationists opposing the teaching of evolution have been turned back in case after case, American Indian tribes have succeeded in using their own religious beliefs and a federal law called the Native American Graves Protection and Repatriation Act to empty archaeological museums of ancestral bones — including ones so ancient that they have no demonstrable connection to the tribe demanding their reburial. The most radical among them refuse to bow to a science they don’t consider their own. A few even share a disbelief in evolution, professing to take literally old myths in which the first people crawled out of a hole in the ground.

In this turn back toward the dark ages, it is not just skeletal remains that are being surrendered. Under the federal law, many ceremonial artifacts are also up for grabs. While some archaeologists lament the loss of scientific information, Indian creationism is tolerated out of a sense of guilt over past wrongdoings.

In Johnson's piece, he quotes Southwestern archaeologist Steve Lekson as one of the scientists willing to tolerate this tradeoff. When I interviewed

Lekson in 2010 for a special Science magazine package

on the 20th anniversary of NAGPRA, he was deeply conflicted but also unflinchingly honest, as this brief exchange illustrates:

KK: What about NAGPRA's impact on archaeology? What is being lost to science? SL: Osteological analysis--analyses of human remains really are a key part of archaeology everywhere else in the world. But we don't do that now. Osteological archaeology is not a growth industry in North America. We just don't do that. The other part of this that concerns me more, actually, is in the interpretive arena. In my research I am finding out things, I believe, that Pueblo people don't want to hear, and my findings may be edited by writers, or rangers, or museums hyper-sensitive to NAGPRA issues. I'm pretty sure that those findings are already being ignored or edited in public arenas.

As I said to George Johnson on Twitter, I think Lekson is now resigned to these consequences. For a broader look at what happens when political sensitivities and science collide with religion, read Johnson's NYT column